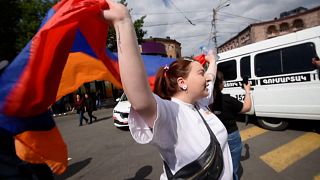 Police in Armenia is arresting hundreds of protesters as opposition supporters seek to expand their month-long movement to the capital, Yerevan.

Opposition protests since 17 April have called on the public to commit acts of civil disobedience, blaming Prime Minister Nikol Pashinyan for what they see as unacceptable concessions made in negotiations with Azerbaijan over the disputed Nagorno-Karabakh region.

Clowns back at Brazilian hospital after COVID-19

A group of clowns resumed in-person performances at a Rio de Janeiro hospital on Wednesday after they were suspended for two years due to the COVID-19 pandemic.

Connecting Europe Days: Nothing is too far for electric vehicles

Clowns back at Brazilian hospital after COVID-19