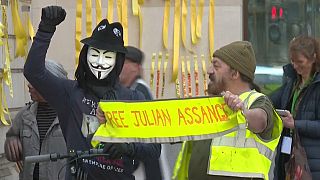 A UK court on Wednesday issued a formal order to extradite WikiLeaks founder Julian Assange to the United States to face trial over the publication of secret files relating to the Iraq and Afghanistan wars.

The decision now rests with interior minister Priti Patel, although Assange may still appeal within 14 days of any decision to approve the extradition.

The ruling Wednesday by a magistrate in central London brings the long-running legal saga in the UK courts closer to a conclusion.

But Assange's lawyers have until May 18 to make representations to Patel and could potentially launch further appeals on other points in the case.

Munich Airport saw its traffic disrupted after climate activists staged a protest against the environmental impact of air travel. The group "Last Generation" said some of their members glued their hands on the tarmac.

Deadly floods in Lisbon kills one person and causes chaos

Iran executes its first prisoner convicted due to nationwide protests

American basktball player Griner lands in US after prisoners swap