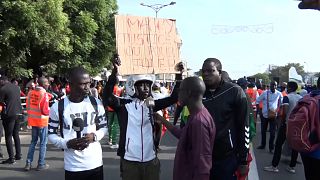 Protest calls for an independent judiciary in Senegal

Many of the protesters directed their anger at President Macky Sall, who has been accused by critics of interfering in judicial cases to benefit himself politically. He has denied the allegation.

Senegal has long been considered a bastion of democracy in Africa and a regional leader on diplomacy issues in West Africa.

Munich Airport saw its traffic disrupted after climate activists staged a protest against the environmental impact of air travel. The group "Last Generation" said some of their members glued their hands on the tarmac.

Deadly floods in Lisbon kills one person and causes chaos

Iran executes its first prisoner convicted due to nationwide protests

American basktball player Griner lands in US after prisoners swap