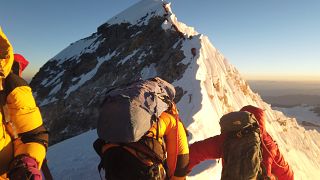 Deaths on Everest's summit blamed on commercialisation of expedition

Adventurers trying to reach the summit of Mount Everest have been facing an even harder climb this season. Overcrowding is reportedly creating queues which cause delays in the so-called ‘death zone’, where the lack of oxygen can be fatal.

In 2019 alone at least 13 climbers have died. The cause for the deaths is believed to be the combination of bad weather, lack of experience and the high number of permits issued to people by the authorities.

Critics say that Nepal’s tourist board should limit the number of people on the mountain. This season so far a record 381 Everest permits were issued to foreign climbers. Long queues near the top have been widely reported as a direct result.

British mountaineer Richard Hays Fisher died on Saturday while descending from the peak on what appears to have been altitude sickness at 8,600 meters. On his last Instagram post on the 19th May he wrote: “with a single route to the summit, delays caused by overcrowding could prove fatal.”

Mary Broaster is an amateur climber who summited Mount Everest last Wednesday. She spoke to our Good Morning Europe’s programme on how deaths normally happen on the descent, when “people are out of energy”. She also told us how frostbites on her feet were in part caused by the delays, adding that getting to the top is “only half the way there.” Broaster said her experience was magical but warns amateurs that they need to work hard before trying: “it is very steep, you are very exposed and people should prepare very carefully and take it very seriously.”

Watch Mary Broaster's full interview on how she made it back safely from Mount Everest’s summit in the player above.

Watch: live music and artificial lighting against the backdrop of blackouts in Ukraine

600 artificial LED candles are lighting up a stage in Kyiv so the show can go on.

Russia rejects pullout from Ukraine as condition for talks

Russian army stays on the defensive because of munition shortage

Watch: live music and artificial lighting against the backdrop of blackouts in Ukraine