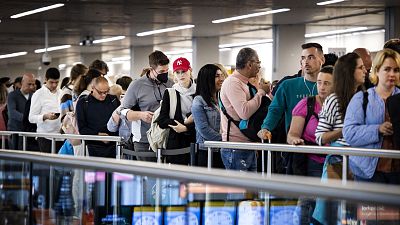 Schiphol Airport has imposed a passenger cap for September and October after a horror summer of queues.   -   Copyright  AFP
By Charlotte Elton  with EBU  •  Updated: 10/10/2022

Earlier this month, the airport announced capacity caps of almost 20 per cent until the end of October. As its security staff shortage continues, Schiphol will continue to operate at reduced capacity in the coming months.

The decision - which comes just weeks after the resignation of Schiphol CEO Dick Benschop - follows a summer of travel chaos and flight cancellations at the airport.

Passengers have faced long lines for security checks due to staff shortages, causing many to miss their flights.

Schiphol will reduce the maximum number of departing passengers by around 9,250 passengers, or 18 per cent, per day.

In the holiday weeks, it will allow an average of 50,000 passengers per day. This will drop to 46,000 - 13 per cent less than before the pandemic - in other weeks, and will be reassessed at the end of December.

"This decision first and foremost is bad news for passengers and for airlines," admitted Royal Schiphol Group COO, Hanne Buis.

“Nevertheless, the decision taken is necessary with the safety of passengers and employees in mind."

Why is Schiphol Airport restricting flights?

The new restrictions are being imposed to cope with a security guard shortage.

During July and August, employees received an extra of €5.25 allowance per hour. Now that the bonus period is over, staff are quitting in droves, claims union Joost van Doesburg, a representative for the Netherlands Trade Union confederation.

“Many staff came especially for this allowance," he said last week, as the airport struggled with mammoth queues.

"The summer allowance has thus helped to cope with the summer problems but has not helped make the problems at Schiphol disappear in a sustainable way."

This latest exodus compounds existing staffing problems. Airlines and airports slashed jobs during the COVID-19 pandemic, making it difficult to quickly ramp back up to serve the new burst of travellers.

Will my flight from Schiphol be cancelled?

The restriction on passenger numbers will force some airlines to cancel flights.

Dutch national carrier airline KLM described the decision as "the last straw",  saying "Again and again, airlines and their passengers need to offer the solution."

The airline says it has no choice but to limit ticket sales for the coming winter, taking the total damage to missed revenues to more than €100 million.

Airlines will communicate with passengers individually.

Previously, Schiphol has invited passengers with cancelled or missed flights to apply for compensation.

Usually, airlines, not airports, are responsible for compensation. However, the Dutch airport introduced the policy earlier this year after passengers faced mammoth delays.

Schiphol said that the impact of the cap would be clear within two weeks.

How bad have queues been at Schiphol?

Amsterdam’s Schiphol Airport was once again hit by long queues last week, with more than 80 flights cancelled on Monday.

Lines stretched hundreds of metres outside the terminal doors, as the beleaguered airport asked multiple airlines to cancel flights.

In addition to the cancellations - intended to ease stress on the terminal - around 650 flights were delayed.

Schiphol Airport blamed the chaos on a lack of security staff in the airport.

“Staffing levels at security today are lower than what Schiphol had requested of the security companies,” an airport spokesperson said.

“As a result, there is a shortage of security personnel and the number of waiting travellers is increasing, especially in Departures 3.”

“Unfortunately there is a chance that travellers will miss their flight due to long waiting times,” they added.

The airport apologised for the situation and the “disappointment” it would cause.

It was cold comfort to thousands of frustrated travellers, many of whom took to social media to vent their anger at the long delays.

“Huge shout out to Schiphol for the 4 and a half hour wait in these queues, only to find out our flight has been cancelled due to the chaos,” wrote one user.

“Schiphol chaos is the worst I’ve seen in more than 40 years flying,” claimed another.

Others described waiting on the tarmac for up to five hours to allow stranded passengers time to board.

“Dozens of missed connections on the other end. Disgrace is the right word,” one woman said.

Many airlines urge their passengers not to arrive more than four hours before their flights, to avoid putting undue pressure on the airport.

However, some passengers who followed this advice described missing their flights - and advised others to arrive at least five hours before scheduled take-off.

In a statement released in September, airport CEO Dick Benschop said he hoped his resignation would give the airport a "new start."

“I’ve done my very best, but we’re not there yet. I do hope it gets better soon,” he wrote.

"I do not want attention on me to become an obstacle for Schiphol.”