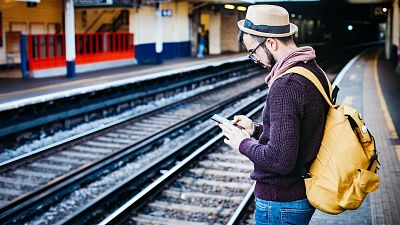 Switching planes for trains is one the best ways to reduce your carbon footprint.   -   Copyright  Canva
By Euronews  •  Updated: 29/09/2022

Changing the way you travel is one the best ways to reduce your carbon footprint. According to Eurostar, flying from London to Paris emits 14 times more CO2 than travelling by train.

Luckily, countries across the EU are investing in railways that provide better - and faster - connections than ever before.

From budget-savvy night trains to cross-country tracks, here are all the latest European railway routes.

Vienna to Paris with Nightjet

Austrian national rail firm ÖBB has been trailblazing Europe’s sleeper train revival with NightJet since 2016. In late 2021, it launched a new route between Vienna and Paris via Salzburg and Munich.

The journey takes 14 hours and runs three times a week in both directions, with prices from around €30 for a seat to €120 and up for a private compartment.

Berlin to Stockholm with Snälltåget

Swedish railway company Snälltåget has rerouted its Berlin to Malmö train service over Hamburg and Denmark, while extending it to Stockholm. The full journey takes just under 17 hours with prices for the direct service from around €50.

Genoa to Naples with NTV Italo

The journey from Genoa to Naples takes just under seven hours and costs from around €80 return.

Milan to Paris with Frecciarossa

Faster and more luxurious than previous services on this route, the train takes just under seven hours. Tickets are as cheap as €29 - though splash out on an ‘executive’ fare to travel in a comfy armchair.

Portugal has approved plans for a high-speed rail line between Lisbon, Porto and Vigo. It will be part of the wider Iberian high-speed rail network uniting the country and connecting it with Spain.

Currently it takes almost three hours to travel by train between Porto and Lisbon. The new rail link will slash the journey time to just 1 hour 15 minutes. Ultimately, the new line will connect the Portuguese cities with Vigo in Spain.

Snow sport lovers are bracing for a new overnight train launching between Amsterdam and some of Austria’s biggest ski resorts.

TUI’s ‘Ski Express’ will depart from Amsterdam every Friday night between 23 December and 31 March. After leaving the Dutch capital at 5:30pm, the service will stop at Utrecht, then continue directly to Austria.

Amsterdam to Zurich with Nightjet

Austrian-led night train pioneer NightJet launched a route between Amsterdam and Zurich in late 2021. It leaves at 8.30pm and arrives at 8.05am.

Madrid to Alicante and Valencia with Ouigo (October 2022)

In October 2022, SNCF-owned Ouigo is set to launch a new high-speed route between Madrid, Alicante and Valencia. Tickets will initially be priced at €9 one-way with one suitcase, but will cost around €30 after the launch period.

By 2023, the operator also plans to connect Madrid with Córdoba, Costa del Sol, Málaga and Seville.

Barcelona to Madrid with Iryo (November 2022)

Travelling between Spain’s capital and its top tourist city is about to get faster and cheaper with a new high-speed rail service from Iryo.

From late November, 16 return trains will run daily between Barcelona and Madrid, taking as little as 2.5 hours each way and costing just €18.

Ljubljana to Budapest with Hungarian Railways

Launched in December 2021, the Hungarian Railways train from Ljubljana, Slovenia, to Budapest, Hungary, runs through Graz in Austria for a scenic ride. The journey takes from 7.5 hours and trains depart at 5:05am and 9:35am, starting as low as €16 each way.

Stockholm to Hamburg with SJ EuroNight

Launched in September 2022, the Stockholm Central to Hamburg-Altona night train is powered by renewable energy. It departs daily at 5.30pm and arrives at 6.30am, passing through Copenhagen along the way.

Combined with existing Eurostar and Deutsche Bahn services, the service can also be used to travel from London to Stockholm in less than 24 hours.

In a 2020 press conference, Nightjet announced it will launch a new night train between Zurich and Rome in winter 2022. It remains to be seen whether the plans will go ahead as scheduled. Currently, the operator’s only Rome routes include Vienna, Salzburg, Villach and Munich.

London to Bordeaux with Eurostar (2027, maybe)

Eurotunnel execs have hinted at plans for a London to Bordeaux route, which they aim to launch within the next five years. They hope the new infrastructure will encourage private jet users to visit the Côte d'Azur more sustainably.