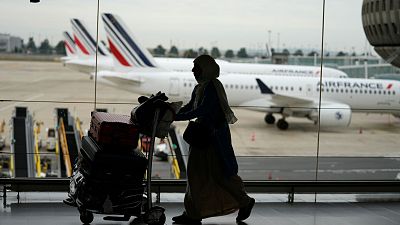 Many domestic and some international flights were canceled in France Friday as air traffic controllers went on a national strike over pay and recruitment issues.   -   Copyright  AP Photo
By Charlotte Elton  •  Updated: 20/09/2022

French air traffic controllers are set to strike again next week, after industrial action grounded more than 1,000 flights on Friday.

Hundreds of thousands of travellers faced severe disruption as airlines radically slashed their Friday schedules to cope with an air traffic walkout.

The strike will go ahead on 28, 29 and 30 September. It will be called off if the union reaches an agreement with France’s aviation authority, the DGAC.

“Between 2029 and 2035, one third of the [air traffic control] workforce is retiring. It is imperative that we anticipate and plan recruitment,” the statement says.

“If not, the consequences will be inevitable in terms of the public service, working conditions and flexibility.”

The SNCTA strike will coincide with a nationwide strike by France’s General Confederation of Labour Union on 29 September.

The union’s members - including baggage handlers and technical airport staff - will walk off the job between 4am on 29 September and 7am on 30 September.

How much did last Friday’s strikes impact travel?

Air traffic controllers walked off the job between 6am Friday 16 September and 6am Saturday 17 September.

The strike grounded over a thousand flights, including ‘overflights’ - flights that did not land in or depart from France but that passed through French airspace.

Many passengers took to social media to vent their frustration over the strike.

In one Twitter thread, a Ryanair passenger detailed his horror experience landing in the wrong country. His plane to Faro, Portugal, was diverted to Malaga, Spain, because the delayed plane missed Faro Airport’s curfew.

“Got to the Dublin airport 12 hours ago and now I'm in a petrol station in Malaga at 5:41am, send help,” wrote Barry Masterson.

The airline blamed the French air traffic control strike, explaining that the disruption was “entirely beyond” Ryanair’s control.

"To minimise disruption to passengers, Ryanair quickly arranged for a coach to transport passengers from Malaga Airport to their final destination," the spokesperson said.

"Ryanair sincerely apologises to passengers for the inconvenience caused as a result of this unjustified French ATC strike."