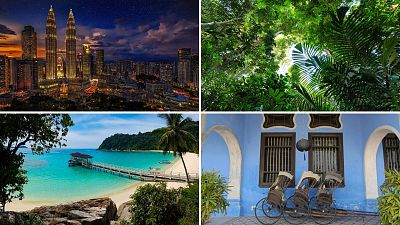 Malaysia has just announced a new digital nomad visa in an attempt to position itself as Southeast Asia’s next big hub for remote workers.

As well as launching the ‘DE Rantau Nomad Pass’ for qualified foreigners, the country has promised to build digital nomad communities. It is also creating more remote work hubs with stable internet connections throughout the country.

Who can apply for a Malaysia’s digital nomad visa?

The new visa was announced by the Malaysia Digital Economy Corporation (MDEC) - a government initiative to boost the country’s digital revolution and economy. The ‘DE Rantau’ programme targets both local and foreign digital nomads.

Malaysia’s digital nomad visa will be available to those earning over €24,000 per year. The visa fee is MYR 1,000 (€221) and recipients will receive exclusive offers from Malaysia’s remote working hubs.

To be eligible, you must be a freelancer, independent contractor or a full-time remote employee working in the digital domain. IT is the main profession targeted, including cybersecurity experts and software developers, digital marketing, and digital content creation and development.

You will need to show proof of employment, such as an active contract or multiple contracts of at least three months with local or foreign clientele. You can also use an active employment contract with a foreign company.

How long can you stay in Malaysia on a digital nomad visa?

The DE Rantau scheme allows you to stay in Malaysia for 3 to 12 months. It is renewable for up to another 12 months.

Workers are permitted to bring their spouse and children with them under the scheme for a cost of MYR 500 (€110) per dependent.

Under current visa rules, remote workers from eligible countries - including EU member states, the UK and the US - can stay in Malaysia visa-free for up to 90 days. Those from non-exempt countries must apply for a visa, employment pass or professional visit pass.

Is Malaysia a good place to for digital nomads to live?

In 2021, an InterNations survey voted Kuala Lumpur as the best city in the world for expats to live and work in. It took into account quality of life, ease of settling in, finance and housing, and urban work life.

Like much of Southeast Asia, Malaysia is very affordable compared to Western countries. According to financial technology company Wise, the average monthly cost of living in Kuala Lumpur - Malaysia’s capital - is €487, not including rent. For a family of four, the monthly cost is €1,736. A one-bedroom flat in the city centre costs an average of €461 a month.

As well as emphasising the low cost of living, MDEC is promoting its new nomad visa by highlighting Malaysia’s low crime rate and multicultural society.

The country’s crime index (the total number of crimes per year per 1,000 people) is 57 - slightly worse than France’s 52 and the UK’s 47, according to World Population Review.

Indigenous, Malay, Chinese and Indian people come together to form a vibrant multicultural society in Malaysia. Islam is the country’s official religion, but the government guarantees religious freedom and there are also large Buddhist, Christian and Hindu populations.

While alcohol is forbidden for Muslims in Malaysia, the rest of the population is free to drink. Nightlife may be more subdued than in neighbouring countries like Thailand, but expat bars and swanky rooftop lounges define Kualar Lumpur’s party scene.

It’s also cheap and easy to travel to neighbouring countries like Singapore, Indonesia, Thailand and Cambodia.