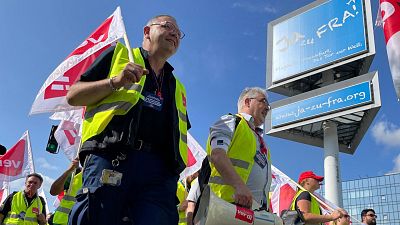 At the end of July, more than 1,000 flights were cancelled when airport staff walked out over pay. It is hoped that the deal will avert further strikes during the busy summer travel season.

How much more will Lufthansa staff get paid?

Reached after a third round of negotiations, the pay deal includes a fixed hike of €200 a month, applied retrospectively from 1 July this year. An additional increase of 2.5 per cent, or at least €125 a month, will apply from 1 January next year, followed by a further 2.5 per cent from 1 July 2023.

"This is a good result, which means a monthly increase of at least €377 up to €498 across all employee groups," says Verdi labour union’s deputy chairwoman and negotiator Christine Behle.

It will mean bigger increases for lower-income staff and smaller ones for workers in higher income brackets. For instance, staff working at airport check-in counters will see total pay increases of between 13.6 per cent and 18.4 per cent, depending on how long they have been with the company, says Verdi.

Lufthansa added that the deal would mean an increase in gross base salaries of 8.3 per cent for workers earning €6,500 euros a month and of 19.2 per cent for those making €2,000.

Also, for lower-income workers, hourly pay will be set at €13 from 1 October, above the legal minimum of €12. The union had originally demanded a 9.5 per cent pay hike for ground staff.

The wage agreement will run for 18 months.

However, the carrier still faces uncertainty over possible walkouts by its workers. It is set to hold confidential pay talks with pilots, who have already voted in favour of strikes.

Airlines across Europe are facing labour strife this summer. The rapid recovery in tourism following the easing of COVID restrictions has led to staff shortages.

During the pandemic, wage increases in the aviation sector were held back. With inflation now hovering around 8 per cent, demands for higher pay have reached a fever pitch.

Earlier on Thursday, Lufthansa said it expected demand for short-haul flights in Europe to drive growth at its passenger airlines this year, forecasting a return to group operating profit for the full year.