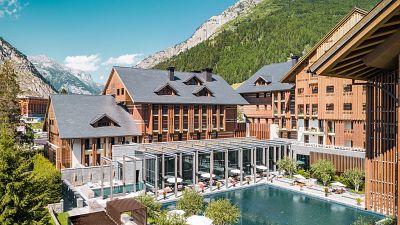 High in the Swiss Alps, one luxury resort is enticing visitors with an unusual attraction. The Chedi Hotel in the mountain town of Andermatt is home to a cigar library containing a vast specialised collection.

Many are rare and very expensive with some guests even visiting the resort specifically to sample them. Adam Török, a member of the bar team who mans the collection, explains what to expect when visiting a cigar library.

What is a cigar library?

The Chedi’s cigar library is made up of two elegantly furnished rooms. The first is a cosy, softly lit lounge with plush chairs and bookshelves where guests can smoke. Just off this room is a locked cabinet lined with glass display cases filled with row upon row of cigars.

Here, the hotel presents some of its collection of nearly 950 cigars produced by over 400 brands in 15 different countries. A large number of the pieces are limited edition or rare. In fact, some cigars are for display only, and cannot be bought by guests.

"We have guests from all over the world that come here for the cigars," says Török, "as well as a lot of important people in the cigar industry."

Many of the items in the hotel’s collection are not available in shops.

What is the most expensive cigar in the library?

The hotel is also working to amass a large collection of Cuban cigars, which are becoming rarer as around half those the country produces now go directly to China. Some of these are made in very limited numbers, as little as 10,000 pieces.

Prices depend on the aging time of the cigars, too. The edicion limitada is aged for two years, the reserva for three and the gran reserva for five.

The rarest cigars of the collection, which are for display only, include ones produced in limited numbers for famous people. This includes the Presidencia cigar, created in 2006 for Fidel Castro and his elite circle, and two cigars gifted to Castro for his birthday in 1975.

They also have examples of early cigarettes from the 1920s made for women and cigars from the 19th century.

Where does Chedi Hotel source its rare cigars?

Executive assistant manager Tim-Martin Weber started the collection in 2018 and in four years has expanded the selection from 100 to nearly 1000 cigars.

The hotel sources many of its rare items from auctions, where you can find one-of-a-kind pieces. Some also come from the world renowned House of Grauer cigar lounge in Geneva.

How do you store cigars?

The display cases in the cigar library are called humidors and they are specially designed to keep these valuable items in the best condition.

"Cigars need to be conserved at a temperature of about 17 degrees Celsius and 65 to 70 per cent humidity," Török explains. "If you leave a cigar out on a table for a few days, it will dry out and lose its flavour."

The hotel also has a vast storage room with the ideal conditions for conservation where the rest of the collection is housed.

Like wine, cigars can improve with age. “You have to find the right balance,” says Török.

“You can age a cigar for 100 years, although these are not for beginners.”

Are there cigar sommeliers?

As Török explains, choosing a cigar can be a bit like choosing a fine wine. When guests arrive in the lounge, he and his colleagues are in hand to help find something to suit their tastes.

"Some guests are trying a cigar for the first time so I suggest a milder, easygoing option," explains Török.

Other clients may be more experienced and look for more powerful, stronger notes.

"Cigars have a whole range of flavours including woody, creamy, floral and chocolatey," he says.

At the Chedi's cigar library, guests can settle in the lounge and pair a cigar with a glass of whisky or rum.

In the summer months, you can also sit outside in the courtyard and puff away while admiring a view of Switzerland’s famous Gotthard Pass and distant mountains.

Meet Miffy the travelling bunny: A ‘tailblazer’ in his field