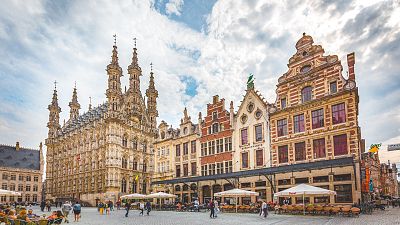 Just 25 minutes outside of Brussels, the historic city of Leuven is best known for brewing Stella Artois.

But the town is so much more than that - crammed full of historical gems, elegant boutiques full of flowing silk shirts and more restaurants than you could eat your way through in a week.

What will most surprise you about this ancient city though, is the quiet.

My hotel, the chic St Martin’s Klooster, located in a former monastery, is just a 20 minute walk from the train station, and during my journey only four cars passed me by.

The rest of the traffic is made up of gently rumbling city buses and students on bicycles. And my gosh are there a lot of these.

Is Leuven a cycler’s paradise?

Often compared to the UK’s Oxford or Cambridge, Leuven’s student population is 50,000 strong and most of those young people get around on two wheels.

This means it isn’t the place to stroll around looking at your phone, unless you enjoy narrowly escaping the wheels of the ubiquitous ‘sit up and beg’ bikes that take corners at quite a clip.

As long as you keep your eyes off your digital devices though, Leuven is the perfect city for pedestrians and cyclists alike. Thanks to an ambitious carbon cutting plan, Leuven has become one of the greenest cities in Europe, with cars all but banned from the centre.

The difference this makes is astonishing.

I’ve never visited a place with so little background noise, meaning that when I open my hotel window the outside is just as quiet as the interior.

Don’t let the quiet atmosphere fool you though, thanks to the students, there’s plenty of buzz to be found. So what better way to discover it than by going out on the town?

There's so much to discover, especially as Leuven was recently voted 'Europe's most open-minded city'.

Where to eat in Leuven

Leuven has a thriving gastronomic scene, with cafes, restaurants and bistros spilling out onto the cobbled pavements.

Even on a Tuesday night, the restaurants here are packed. With locals, students and tourists all enjoying the zing of a city which is growing in popularity.

If you like your restaurants fizzing with energy, then Baraca on Tiensestraat, in the city’s main restaurant district, are the places for you. Serving a range of pizzas, pastas and small plates, alongside fruity wines and cooling beers, the restaurant is rammed when I visit on a Tuesday evening.

The cockles come dressed in a tangy sauce, while the pizza is covered in rich tomatoes on a crispy base, just how Italy intended it.

If you’re in the mood for a slice of fine dining then Taste, a smart and sophisticated restaurant on Naamsestraat, should be where you head.

With warm lighting, intimate tables and even your own cutlery drawer, this smart restaurant is perfect if you want to spoil yourself. The theatrical elements, from a gothic sheep’s skull to a quirky ice cream cart, add to its many charms - and the wines, paired perfectly with each course, are worth coming back for.

For those looking to discover where all those students are hiding - it’s certainly not in a fine dining restaurant - the place to go is De Hoorn.

Set in the modern, industrial canal zone, the restaurant was once a Stella Artois brewery. Now though, it’s home to an open-plan restaurant and bar, and on the night I visit, lots of happy students.

Serving the usual things that students know and love, from burgers to tacos, De Hoorn is both laidback and lively, with friendly staff and happy customers. The sort of place you could go with a big group of friends or enjoy on your own without feeling awkward. The burgers are tasty, the desserts are sugary and there’s a decent beer menu - what more could any self-respecting student want?

Well, perhaps a few more beers. Which is when it’s time to head to the Oude Markt.

Is this really Europe’s longest bar?

Marketed as ‘Europe’s longest bar’ the Oude Markt is actually a collection bars, standing shoulder-to-shoulder all along the cobbled street.

Students love this place, so expect it to get noisy, especially on Thursdays, which is the night most students go out in Leuven. But if you’re hoping for a quieter tipple, the early evening is a good time to visit, when there are less people around, but no shortage of things to look at - the architecture alone will draw you in.

Apart from one or two originals, most of the buildings in the square are replicas, because despite its current serenity, Leuven had a troubled 20th century.

What happened to Leuven in World War One?

During August 1914, much of the city was burnt to the ground by German soldiers, including the university’s library, which resulted in the destruction of 230,000 books.

After the war, the library was rebuilt at a higher point in the city, with the support of the US. In fact, the library was designed by American architect Whitney Warren, most famous for the Grand Central Terminal in New York. This isn’t the end of the story though, as the library was destroyed yet again in the Second World War, along with more rare books and manuscripts.

Rebuilt after the country was liberated, the library is both a working university building and a monument to how places recover from war.

It’s fitting, then, that at the top of the tower I meet Luc Rombouts, a carillon player who has been playing the tower bells since 1991.

I start every day playing with the national anthem of Ukraine, as an act of solidarity with the Ukrainian people, I will continue playing it as long as it is needed.

Now though, as war has once again reached Europe’s shores, Luc’s daily routine has changed.

“I start every day playing with the national anthem of Ukraine, as an act of solidarity with the Ukrainian people,” he tells me. “I will continue playing it as long as it is needed.”

The Great Beguine: A refuge within the city walls

After learning about Leuven’s struggles in both World Wars, escaping from it all might seem appealing. Thankfully, tucked away in the city is the perfect place to grab a moment’s peace and quiet.

The Groot Begjinhof (Great Beguinage) is a 13th century town within a town, with a unique history.

From the 13th century to the late 20th, the Great Beguinage was home to a community of women, known as beguines, who wished to retire from society.

The are often widows, whose husband’s have died, and they’re not interested in marrying again, so they want to just retire from society.

“They’re often widows, whose husband’s have died, and they’re not interested in marrying again, so they want to just retire from society. They aren’t interested in being around men,” explains my Leuven Leisure tour guide, Ryan McGuinness.

”They haven’t officially been ordained, but they’re unofficial nuns. The idea is that they’re self-sustaining, they craft their own things, food is shipped to them on rivers, they brew their beer, they make their own clothes," he continues.

While this might sound like an idyllic reality, it's no longer the case anymore. The last beguine died in the 1980s and the UNESCO World Heritage Site is now owned by the University of Leuven.

While the beguines may be gone, the sense of calm and quiet remains, making it an incredibly peaceful place to wander around.

Equally peaceful, but on the outskirts of the city, is Park Abbey. A wonderfully preserved 12th century site, the abbey was originally home to the Norbertines, an old order of the Catholic Church.

Packed full of historic artworks, from the awe-inspiring and gravity-defying stucco ceilings, to the 17th century Jan de Caumont stained glass windows - which have just been restored - the abbey highlights the city’s important place in history.

“If it wasn’t for the two world wars, we’d be up there with Oxford and Cambridge. But history is history,” my tour guide says.

Why you should visit Leuven’s town hall

Undoubtedly the most striking building in Leuven though - is the ornate town hall in the Grote Markt.

The church’s 'hololenses' tour - which sees visitors don a virtual reality headset - is a great metaphor for the way that history and modernity are layered on top of one another in this city.

With so many replica buildings, it’s hard to know what’s original and what’s not. But perhaps it doesn’t matter.

The city is cycling into the future now, and the past won’t hold it back.