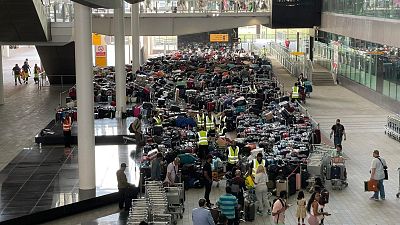 After a luggage system failure, piles of unclaimed baggage at Heathrow airport have begun to smell.   -   Copyright  @Bolt_Shep
By Rebecca Ann Hughes  •  Updated: 29/06/2022

Travellers at London’s Heathrow airport have been complaining about the smell coming from piles of unclaimed luggage.

Some passengers have said the luggage, which has been sitting in terminals for up to 10 days, is beginning to smell.

Customers at Heathrow have been posting photos of the piles of unclaimed baggage on social media.

Passengers have also complained about an unpleasant odour coming from the cases. One traveller compared the smell to “festering bush meat.”

Suitcases have been piling up in Heathrow’s baggage claims after a glitch with the airport’s luggage system last week.

Passengers have had to wait days to receive their baggage or still haven’t got them back. One traveller who arrived at Heathrow on June 18th was still waiting for her luggage nearly 10 days later.

“I went to search on June 27 and was told it was likely in the basement with over 500 other bags. When can I expect an update, or better, my bag back?!?” she wrote.

Another social media user pleaded for the urgent return of her bags which contain her medicine.

“I literally beg you to send me my checked bag. It’s been 5 days and I need medication that is in it.”

The passenger added that she wouldn’t have checked her bag had the airport made travellers aware of the problems.

Heathrow airport has responded to complaints saying the recent baggage delay has now been resolved.

“We are working round the clock with airlines to reunite passengers with their bags as quickly as possible,” the airport wrote on Twitter.

Airlines have been forced to cancel thousands of flights and travellers have been stuck in lengthy queues at check-in and security in airports across Europe.

At Heathrow, hundreds of check-in and ground staff have said they will take industrial action this summer over low wages.

Bad weather clouds your opinion of a hotel, researchers say