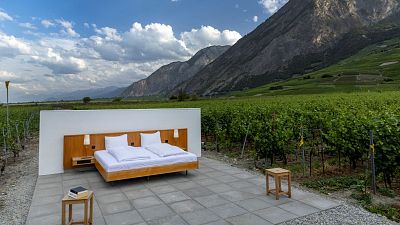 "Couldn't sleep," and "my room was too noisy," may be complaints that most hoteliers dread from their guests. But for the Riklin brothers that is the entire point of their latest art installation.

The Swiss concept artists have launched an ‘anti-idyllic’ version of their zero star hotel concept, where guests have a double bed on a platform without walls or ceiling, located on a roadside next to a petrol station in the village of Saillon, in the southern canton of Valais, Switzerland.

Three previous versions were set up in the rolling Swiss countryside or inside a bunker, but the new room - without walls or ceiling - is situated close to a sign showing petrol prices and passing cars.

Staying here is a statement about the need for urgent changes in society.

The intention is to make guests think about all the problems in the world, the twin brothers said, and inspire them to act differently.

"In this new anti-idyllic version, sleep is not the point," said Frank Riklin. "What's important is reflecting about the current world situation. Staying here is a statement about the need for urgent changes in society."

Guests are invited in their 'half sleep' to consider topics like climate change, war, and humanity's endless competition for perfection and the damage it causes the planet.

"In a nutshell, now is not the time to sleep, we have to react," said Patrik Riklin. "If we continue in the same direction we are today, there might be more anti-idyllic places than idyllic."

The project, which has been developed with hotelier Daniel Charbonnier, also features three other ‘null stern’ rooms (German for zero star) in a relatively quiet vineyard and on a picturesque hillside.

The rooms, which come with butler service offering drinks and breakfast, will be available from 1 July to 18 September. The price for an imperfect night's sleep: 322 euros (325 Swiss francs).

It might not be how everyone wants to spend their hard-earned cash, but a waiting list of 6,500 people speaks to Null Stern’s surprising popularity.

Watch the video above to learn more about the zero star hotel.

The top 7 hotels in Italy, Spain and Greece, according to Tripadvisor