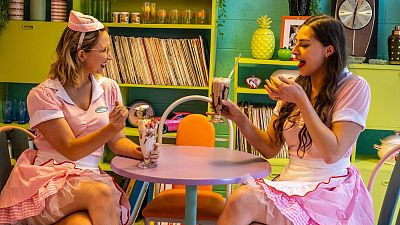 The service only goes from bad to worse at Karen’s Diner in Sydney.

Rude waiters scowl and throw menus at customers. But having a terrible experience is the whole point of the restaurant's unique approach to dining.

The idea is based on the expression, ‘you’re such a Karen’ a term used to describe someone who complains about everything.

"It's one of these concepts that you just sort of think 'this might work, this might not' and it sort of surprised us because people love to be abused apparently,” says Mitch Ransley, general manager of Karen's Diner Sydney.

Why do people love Karen’s Diner in Sydney?

The lack of formality is also refreshing for customers.

“A lot of Sydney restaurants are very pretentious. You're dressing up, you're doing your 'please' and 'thank yous', to come here it's quite refreshing. You can really be yourself or be the evil version of yourself,” Ransley adds.

But there are basic rules: the staff cannot mock people with disabilities, make racist or sexist comments.

"As long as you don't do anything with malice in your heart, go and have fun,” says Elizabeth McDonald, food and drink editor for Time Out Sydney.

“When I did finally get one of the servers to break character he was like 'This is the best job in the world! Oh my god! I can call that person a…whatever, and not get in trouble for it.’"

What are customers' reactions to this ‘rude’ dining experience?

The customers come for the abuse.

"I mean, they made everyone 'moo' at me because I'm vegan!" one of the customers says.

"There's a huge market for people who may not necessarily want to go out and have a fine dining experience,” McDonald adds.

“They may not want to go out and have the world's best wine. There are plenty of people that, that demographic fits beautifully."

The diner initially opened as a three-month pop-up in October 2021, but the Karen craze is rapidly spreading.

Branches have opened in Melbourne and Brisbane in Australia and in Sheffield in the UK. There are plans for two more venues in Perth and the Gold Coast, with pre-bookings already filling up.

Watch the video above to see the dining experience from hell.

Forbidden attractions: Why we want to visit places we shouldn’t

We set up Italy's first digital nomad village. Here's what we learned

Fairbnb and other ethical alternatives for homestays and hostels