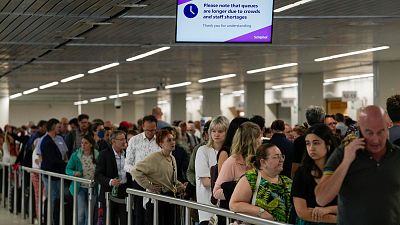 The return of summer travel has been overshadowed by travel chaos in recent months, leaving passengers anxious and confused.

Thousands of people have been left to battle airport queues of up to three hours, delays and thousands of cancellations in many European destinations.

Airports and airlines face staff shortages forcing them to reduce the number of scheduled flights - often at short notice.

Aviation workers themselves are feeling the impact of staff shortages too and now many are threatening industrial action over poor working conditions, pay and job security.

Now, with workers at a number of European airlines and airports set to take part in further industrial action and little promise of a solution to staffing issues, the chaos is set to continue into the busy summer season.

So with airports the epicentre of much of this travel chaos, what can you do to minimise the risk of delays?

When should I arrive at the airport?

"It sounds absolutely mad, but an awful lot of these queues are people who have got a flight at 10am turning up at 5am,” he said.

This means that passengers who arrive within the timeframe specified by their airline are now being caught in queues that are swelling with travellers who have arrived too early.

Manchester Airport has launched a customer campaign urging passengers to arrive three hours before their flights - and no earlier.

The airport’s interim managing director Ian Costigan added, “the airport is asking passengers not to come any earlier than this because they will not be able to check in with their airlines, which could cause unnecessary waits in the terminals.”

Most airports are confident that security queues will improve as large recruitment drives start to reduce staffing pressures over the next few months.

But on 6 May a joint statement from ACI Europe and the Airport Services Association (ASA) warned that ground handling problems could persist for much longer.

What can I pack in my hand luggage for airport security?

Since passenger pile-ups began in March, airport bosses have also been pleading with passengers who may not have flown for a long time to refamiliarise themselves with security rules.

Manchester Airport in particular has been lambasted for its strict security scanning regulations as queues of passengers piled up.

European airport regulations state that passengers must ensure all liquids, gels and pastes in their hand luggage are under 100ml and are packaged into one clear resealable bag to go through the airport security scanners.

Pockets also need to be emptied and large electricals should be taken out of hand luggage and put into a tray.

Some airports also insist on passengers removing belts and boots, so where possible it is worth packing these in hold luggage rather than wearing them to fly.

“Rejected bags and trays can add, on average, an additional 12 minutes to a person’s security process, which when multiplied by the thousands of passengers flying through soon adds up to lengthy delays that can easily be avoided,” said Costigan.

If you want to avoid holding up the queue, it's best to ensure you have complied with all of these requirements before you stood putting your items in the tray at security.

When is the busiest time to fly from an airport?

It is a misconception that flying early is a good way to dodge the worst of the airport queues.

In fact, the biggest queues at Manchester, Birmingham and Leeds Bradford airports are being reported in the early hours - between around 4 am and 7 am.

A spokesperson for Yorkshire's Leeds Bradford Airport speaking to Leeds Live said that the longest security queues were being experienced during peak travel times, from 4 am to 8 am and 1 pm to 4 pm.

Typically, airports also experience increased passenger traffic between Friday and Monday. This is due to weekend leisure trips and commuting patterns.

So if you’re looking to book a flight sometime soon, travelling at lunchtime during the week could be your best bet.

Should I cancel my flight?

The UK's Travel Association (ABTA) has advised people not to cancel their flights despite the ongoing chaos at airports.

"While it is really disappointing if you do experience a delay or cancellation, you do have rights, including for a replacement flight or refund, plus significant compensation in most cases when flights are cancelled less than 14 days before departure," a spokesperson says.

If you do cancel or postpone your trip, check the terms and conditions of your booking to make sure you won't incur any costs.

Despite rail strikes in the UK, looking into alternative ways to travel could be an option if you are yet to book your flights. Overall, trains have been less severely impacted by the travel disruption and connections across Europe are rapidly improving.

Get top tips to beat the travel chaos from Euronews Travel Editor Ruth Wright in the video above.

Bad weather clouds your opinion of a hotel, researchers say