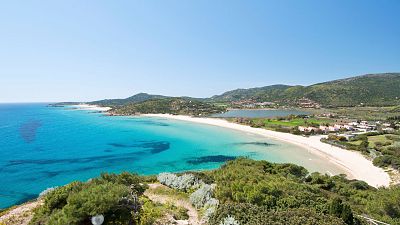 From endless stretches of white sand to dramatic cliff faces, Italy has the right beach for every taste.

But with more than 7500km of coastline to explore, it can be hard to know where to start.

If you’re paralysed by choice, fear not: new Premier Inn analysis has revealed the top trending beach destinations of 2022.

The holiday provider investigated trend data for 130 European beaches, analysing the average number of monthly searches they received and how many Pinterest boards they featured in.

The most highly rated beaches were all Italian, a Premier Inn spokeswoman revealed.

“With summer now upon us, many will be looking for travel and adventure. Italy has so much to offer, so we were eager to provide a handy guide for those looking for a beach holiday to kick off their travels,” she explained.

So dig out your swimming costume, pop on some sunglasses, and get ready to work on your tan: here are seven of the most stunning coastal spots in Italy.

Where are the most trending beaches in Italy?

A calm, sandy bay on the southern tip of Sardinia, Sa Colonia is not to be missed. A kilometre from the Setti Ballas settlement, you know it must be good because the locals come here. . Climb up to the viewpoint at the nearby Torre Chia hotel for sweeping views of the bay’s clear waters and golden sands.

Visitors to Lido Fiori beach, near Menfi on Sicily’s south coast, are guaranteed a refreshing swim - the bay has secured a ‘Blue Flag’ Foundation for Environmental Education cleanliness certification every year since 1998. Post-dip, unwind with a delicious cocktail at the nearby Salisà Menfi beach bar.

Sicily is full of large and uncrowded beaches, so it’s no surprise two spots feature on this list. The small bay of Calamosche 43km south of Syracuse is known to Sicilian speakers as ‘Funni Musca’- Accessible via a 20 minute walk through a nature reserve, the cove’s serene waters are sheltered by two rocky headlands, keeping sunbakers and swimmers safe from the wind.

A medieval village built atop a cliff overlooking the Tyrrhenian Sea, Sperlonga is day-tripping distance from Rome. After a swim at the large white sand beach nearby, explore the meandering alleyways and coffee shops of this quintessential Italian town.

This calm beach is central to the Lingurian seaside town of Sestri Levante, known to locals as ‘la città dei due mari’ (‘the city of two seas’). The so-called ‘bay of silence’ is enclosed by the town’s quaint old buildings and is a very short walk to its cafes and bars.

Want to get away from the crowds? You’ll have to hike for two kilometres through the pristine Bandite di Scarlino nature reserve to reach this secluded cove. The walk is worth it though: expect white sand, crystal waters, and rolling green woods.

Officially the most ‘trending’ beach in Europe, this beloved spot is popular for a reason. Enjoy its soft golden sands and calm waters, or lounge in the baking sun. There are areas where you don’t have to pay, but sun loungers and beach umbrellas can also be hired.

To get away from the crowds, seek out one of the smaller coves further along the bay.

Tourism tax: How a visitor levy could protect the places we love