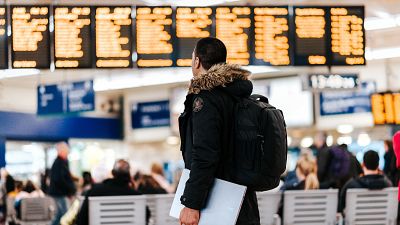 Monkeypox, a rare viral infection, is appearing in small but increasing numbers in Europe.

While the disease is rarely fatal to humans, it has prompted some countries to introduce precautions and restrictions in order to limit the spread.

What is monkeypox and how does it spread?

Monkeypox is a viral infection that was first found in animals. It does not usually spread easily between people. It can, however, be transmitted by close physical contact through lesions and body fluids.

Although it can be passed through respiratory droplets as well, it is uncommon and requires prolonged contact.

“This is not Covid,” a CDC official said. “Respiratory spread is not the predominant worry. It is contact and intimate contact in the current outbreak setting and population.”

Those most at risk of infection have usually had close household contact or sexual intercourse with an infected person. They may also be at risk if they have changed the bedding of an infected person without personal protective equipment.

Dr David Heymann, a leading adviser to the World Health Organisation (WHO), suggested that the current spread of the disease may have been caused by sexual contact between gay and bisexual men at events held in Belgium and Spain.

Is monkeypox dangerous for people?

While the outbreak of monkeypox is raising concern, infected people usually recover from the disease in a few weeks without needing hospitalisation. The mortality rate is less than 4 per cent.

The symptoms of the virus are usually mild - but it can initially cause chills, fever, and aches. Once the fever breaks, a rash often develops which can be itchy or painful and lesions can occur on the face or genitals. Symptoms usually clear up on their own after about 14 to 21 days.

While currently there is no specific vaccine for monkeypox, a smallpox jab provides 85 per cent protection as the two viruses are quite similar. Some antiviral drugs are now being developed for monkeypox.

Those most vulnerable to the disease include immunosuppressed people, pregnant women, and children under 12.

Which countries have monkeypox outbreaks?

More than 230 cases of monkeypox have been confirmed in several European countries, as well as the US, Canada and Australia. The UK, Spain, Portugal, Germany, Belgium, France, the Netherlands, Italy and Sweden have all reported cases of the virus.

The WHO has voiced concern as these recent outbreaks are "atypical…they are occurring in non-endemic countries."

Monkeypox is not usually seen in Europe and is most commonly found in remote parts of Central and West Africa.

The UK, where the outbreak was first identified, currently has 71 confirmed cases of monkeypox so far. On Monday, the first case of the virus was detected in Scotland.

Official guidance from the UK Health Security Agency (UKHSA) says anyone who has had direct or household contact with a confirmed case should isolate for 21 days.

In Spain, the number of confirmed cases of monkeypox has reached 48, while another 67 people are currently being tested.

The majority of the cases in Spain have been traced to an adult sauna party in Madrid that has been identified as a superspreader event. A pride festival in the Canary Islands has also been identified as a possible source of the outbreaks. There are now five suspected cases in the holiday region.

Belgium has become the first country to impose a quarantine for monkeypox cases.

Those infected are required to isolate for 21 days. Contact cases are not obliged to quarantine but they are advised to remain vigilant and avoid contact with vulnerable people.

On Monday, Portugal reported 14 new cases of monkeypox bringing the total to 37. Many of those affected are reported to be young men.

The number of monkeypox cases in Italy has risen to five. Two of the cases are believed to have recently holidayed in the Canary Islands where parties are being investigated as another source of infection.

Denmark reported its first suspected case of monkeypox on Monday. The person in question had reportedly recently returned from a trip to Spain.

What are Europe's monkeypox travel restrictions?

Currently, the monkeypox outbreak has not resulted in travel restrictions being imposed.

However, WHO's Europe regional director Hans Kluge has warned that "as we enter the summer season... with mass gatherings, festivals and parties, I am concerned that transmission could accelerate."

This may prompt stricter restrictions that affect travel in Europe this summer.

Europe at 'epicentre' of monkeypox outbreak, WHO says

Meet the doctor fighting fake news about monkeypox on TikTok

ETIAS: Everything we know about the new €7 fee to enter the EU