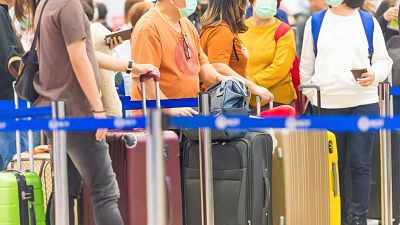 Mallorca airport could “collapse” without the urgent recruitment of more staff, a Spanish police union has warned.

Thousands of holidaymakers have already flocked to Mallorca this year - with many experiencing nightmare delays at the island’s Palma airport.

According to the Unified Police Union in the Balearic Islands, the nightmare queues are only going to get worse.

"During the pandemic, as there were fewer flights and passengers it wasn't a problem, but now we are faced with a great summer season but with few officers,” a union spokesperson said.

"We warned about this situation, but little action was taken.”

Why are the delays at Mallorca airport so bad?

Post-Brexit rules - requiring nonEU residents to have their passports stamped on arrival and departure - have added to the chaos.

“It’s going to be a nightmare this summer at the airport if it’s going to be like this” one British tourist posted on social media earlier this week.

Without these personnel, the police union insists that “the airport would collapse.”

But recruitment isn’t easy - police officers don't want to come to work in Mallorca because they don't get paid enough to cope with the island’s sky-high cost of living.

The union estimates that there are roughly 200 national police vacancies in the Balearic islands, with the shortage flowing down to the airport.

“[Low police numbers lead to] the continuous delay in collecting luggage and the arrival of tourists to their hotels,” a union spokesperson said.

“The big losers from the lack of police are the citizens and tourists.”

Tourism chiefs have urgently called for more customs staff to handle the influx of travellers.

"This problem of congestion in passport controls has transcended in international media, which could discourage international travellers to come to our holiday country,” he said.

“We cannot afford it."

All over Europe, airports are suffering from horror delays, as many people take overseas holidays for the first time since the onset of the pandemic and airlines struggle to fill staffing shortages.

“At the moment, the performance of passenger traffic is trending along our high-case optimistic scenario on the back of travel restrictions lifting across many markets,” he said.

According to ACI modelling, delays and cancellations are inevitable at two thirds of European airports this summer.