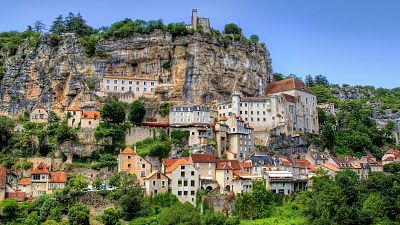 France’s Dordogne region has one of the longest histories in Europe, as well as some of the country’s most romantic landscapes.

Archaeologists have found evidence of human habitation in the Dordogne as far back as 400,000 years ago. The region’s striking limestone hills are full of caves that hide some of the world’s most important ancient paintings.

But it was from the 12th to 16th centuries when villages began to appear on the forested banks of the Dordogne’s rivers. During this period, the region was known by its historical name, Perigord, which local people are still very attached to.

Churches were erected for saints and chateaus built for barons, who later fortified the villages for a succession of wars.

Today, the riverbanks, limestone topography and historical relics combine to make the Dordogne synonymous with achingly pretty villages. Many of them are the pride of France.

Here are seven villages you absolutely must visit on a trip to the Dordogne.

This tiered cliffside village sits above a river gorge and is crowned by a fairytale castle.

Rocamadour is so famously photogenic that it’s worth visiting early in the day to avoid the crowds that descend to wander its streets.

Despite its small size, during medieval times Rocamadour was one of Europe’s most important pilgrimage sites. Because of this, it remains extremely well preserved.

Stone gates and many steps lead up to a religious sanctuary complex with a handful of chapels, crypts and the UNESCO-listed Basilique Saint-Sauveur. Many pilgrims still come here to see the Chapelle Notre Dame’s Black Madonna statue, but today its car-free main street is also lined with restaurants.

Go for a river swim at Limeuil

Located on a beautiful forested hill, Limeuil lies between the Dordogne and Vézère rivers. This waterfront location helped it flourish for several centuries through river trade but also put it on the front line of Viking invasions and wars with England.

Today the attraction of this fortified village is driven by its aesthetics, with its terracotta-roofed houses leading down to a leafy river beach. The water is framed on either side by 19th century arched bridges, providing a picturesque backdrop for swimming and canoeing.

Hike up to La Roque-Gageac’s castle

It’s the sheer limestone cliff rising abruptly behind La Roque-Gageac that makes the village look so spectacular. Or perhaps it’s the huddle of perfect custard-coloured houses strung out along the riverbank like toys. Either way, this Dordogne village is a beauty.

The main attraction here is not the river but the Norman castle at the head of the village. You can reach it via a series of challenging cobblestone streets flanked by dangling restaurant terraces.

Step into a movie at Beynac

Widely considered one of France’s most alluring villages, it’s little wonder that Beynac was used as a filming location for parts of Chocolat (2000).

A trip here feels like stepping back in time. Beynac’s medieval streets are impeccably preserved and a great place to see traditional Perigord roofs made of local thackstone, a special stone slate.

There’s also a river port to explore, where visitors can jump aboard a traditional barge. And above the village, there’s the 12th-century Château de Beynac, which has featured in a handful of films including Revenge of the Musketeers and The Last Duel.

Between mid-June and mid-September, there’s a Monday food market that shows off the Dordorgne’s lauded local produce.

Another of the Dordogne’s famous bastides (fortified medieval villages), Domme has one of the best views in the area thanks to its position 150 metres above the riverbanks.

It was a key strategic defence for the French during the Hundred Years' War and in 1346 was even briefly ruled by the English. Today it’s still encircled by thick-set gates and ramparts.

And underneath the village there’s a secret: a 450-metre-long cave packed with stalactites and stalagmites, which can be toured.

The handsome centrepiece of this village near Sarlat is its fortified Romanesque church, which dates to the 12th century and rises above the village lanes.

Saint Amand, after whom the village is named, was a hermit that is said to have lived in a cave in the hillside here in the 6th century. Beside the village church, there are also the remains of an abbey.

Many relics of traditional life survive around the streets of Saint-Amand-de-Coly, including the bell tower, a communal bread oven and a tobacco barn that’s been converted into an emporium selling regional food.

Beyond the village, there are also trails leading into the countryside where you can explore the region’s natural beauty.

This petite belle is positioned between the Dordogne and Ceou rivers. Walk past the wooden-shuttered stone houses and arched gateways, and you can take a picnic down to the river’s edge.

But the main attraction in this vine-draped village is the Chateau de Castelnaud, a remarkably well-preserved example of a Perigordian castle. Beside it, at the top of the village, pause for gorgeous views down the Ceou Valley.

There’s also a war museum up here, with replicas of arms from the days when the village would have been a strategic defense point.