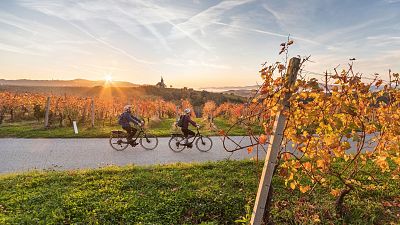 Want an epic eco adventure with lots of time to take in nature? Then a bike-powered journey could be just right.

Slovenia’s new ‘Green Capitals Route’ - which tourists can take by bike or train - links the country’s most beautiful travel spots.

The route was officially launched in October 2020 - but pandemic restrictions kept tourists away.

As the country reopens, here’s everything you need to know about the grand journey - and five other freewheeling European bike adventures to try this summer.

The ‘Green Capitals Tour’ is the ultimate environmentally-friendly travel - even more so if you arrive in Slovenia by train.

“[The route] is the second one anywhere in the world connecting destinations that have been awarded with a sustainability certificate by developing their tourism in a responsible way,” a spokesperson for the Slovenian tourism board said.

“This unique route is your perfect pick for a quick and green getaway to beautiful Slovenia.”

Start your trip in Ljubljana, Slovenia’s capital city. Wander around the bustling central market, picnic in the elegant gardens of Tivoli Park, or catch the funicular up to the medieval Ljubljana Castle for stunning 360 views.

Party animals won’t be disappointed, either: make like one of the city’s 45,000 university students and raise a glass in one of its many bars.

But watch the hangover - from Ljubljana, cyclists have a 65km ride south to Kočevje. The train is also an option.

More than 90 per cent of the “nature capital” is covered in trees. Cyclists will ride in the shadow of UNESCO Heritage site the Krokar virgin forest, a 75 hectare beech copse that survived the ice age. The area is one of the last places in Europe where bears, wolves, and lynx roam in the wild.

The final ‘capital,’ the Bela Krajina region, lies 80 km east of this wild reserve. Reward yourself for a hard day’s cycling with a drop of vino and a gourmet meal at one of the area’s many restaurants.

The stunning journey is easy on the conscience as well as the eyes.

According to the European Cyclist’s Federation, in total, driving accounts for more than ten times as much CO2 per kilometre than riding a bike.

Cyclists are spoiled for choice in Europe. From the rugged Albanian alps to the turquoise coves of the Amalfi coast, here are four of the best cycle tours to try this summer.

The entire Danube cycle path runs for 1200km, meandering from the river’s Southern German source all the way to the Black sea.

If you’re short on time, try the Vienna-Budapest segment of the trip. After a day or two spent marvelling at its baroque splendour and vibrant café culture, start cycling downstream.

The flat trail cuts through lush lowland forests and picturesque villages. After a week in the saddle, soothe aching muscles in one of Budapest’s famous spas.

Follow in the footsteps of countless pilgrims along this iconic route, the most popular in the Camino de Santiago network.

Every year, tens of thousands of devout - and secular - travellers journey the path walked by James the Apostle. Ten per cent of pilgrims do it by bike.

The entire route is a mammoth endeavour, spanning 800km from the rugged Pyrenees mountains to the rolling hills of Galicia.

For a less intense option, start in Ponferrada - a mountain-ringed ancient city in northwestern Spain - and cycle 200 km to the Santiago de Compostela, the end point of the pilgrims' way and the tomb of St James.

Fancy working on your lycra tan this Summer? The Amalfi coast bike ride might be for you.

Hit all the bucket-list spots as you pedal through mediaeval coastal towns Positano, Sorrento, and Ravello. Admire brightly coloured fishing boats bobbing in the harbour and cruise past lemon orchards and olive groves.

Start at Cetara, and cycle west to Positano. Loop around the end of the peninsula - through Sorrento - and back to Salerno. The journey should take roughly six days. To avoid the heat, go later in summer - September is ideal.

If you aren’t afraid of a little thigh burn, this Albanian mountain biking trip is the onefor you.

Spend an epic week peddling through the Accursed Alps. Don’t be put off by the name; the dramatic mountain range is one of the most gorgeous in the world, with towering peaks and ice blue lakes.

If you want it all planned out for you, Much Better Adventures offer an eight-day itinerary with stops at the picturesque Komani Fjords and Valbona Valley.

This picturesque tour will appeal to those who like to pair winding trails with wine-and-dining.

Taste famous French wines at vineyards outside Avignon, and admire the fragrant fields of serene Provence. Pass through St Remy, where Vincent van Gogh created his masterpieces. In Orange, marvel at the remains of ancient Roman amphitheatres.

With all these incredible bike tours on offer, there’s no excuse not to saddle up this summer.