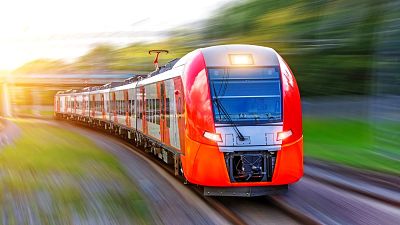 How far do you think you could get in 24 hours travelling only by train?

This is the question that Brit Jo Kibble set out to answer this week. Leaving from his home in London, he wanted to find the furthest point he could get to from St Pancras International Station in a single day.

The timer started the moment the doors closed on the 7:01am Eurostar service to Paris.

“I got to Paris Gare du Nord, took a quick walk across Paris to Gare de l'Est, and caught a train to Strasbourg,” says Jo, a 40-year-old council worker from Greenwich. “From there, I passed through the champagne region and got on a local service to Basel, Switzerland.”

The eastern high speed line out of Paris can probably claim to be Europe’s fastest railway, as the world train speed record was set along here in 2007 (575km/h). We’re going a bit more sedately through the Champagne region today. #train24pic.twitter.com/JU8TNF1DyS

On the way, the public transport enthusiast enjoyed a leisurely lunch in a Swiss dining carriage, before travelling past “beautiful scenery” between Zurich and Milan.

This stretch of track took Jo through the longest tunnel in the world, the Gotthard Base Tunnel. Running through the Alps, it covers a total of 57km and connects northern and southern Europe.

“When you come out of the tunnel, there is this incredible change in the architecture, the landscape and the people,” continues Jo.

“A nice, stylish Italian high-speed train then took me down to Rome from Milan, followed by a sleeper service to the south of Italy.”

From here, many of Jo’s social media followers expected him to take the train to Sicily, where the train boards a boat to reach the mediterranean island.

But ever the strategist, the council worker opted for a more time-efficient route - remaining on the mainland and cruising around the coastline of the Ionian Sea.

“I got on a very small local train around the toe of Italy and ended up at a place called Bova Marina, which is a tiny little village at the end of the world.”

This, he maintains, is the furthest a person can currently travel by train in 24 hours from London St Pancras - a total of 1,960km.

As Jo undertook his train odyssey across the continent, he remained conscious that many people fleeing the war in Ukraine are reliant on those same tracks for vital transportation. For every kilometre travelled, he decided to donate 20p (€0.24) to the Disaster Emergency Committee’s Ukraine appeal.

I’m v conscious that I’m basically messing about on Europe’s rail network while elsewhere on the continent millions are using it to flee and brave Ukranian rail workers are keeping their network running under fire. For every km I get, I’m donating 20p to @decappeal ?? #train24pic.twitter.com/OjDEMmn5kM

“Suddenly in the last couple of months, railways have become the scene of things in Europe we haven’t seen in decades,” acknowledges Jo.

“There was just this slight mismatch between me roaming round the European railway network having a bit of fun, while a couple of thousand kilometres away that same system is proving a lifeline.”

This isn’t the first time Jo has set himself a slow travel challenge.

Last year, he decided to see how far he could travel from London in 24 hours using only bus routes. The unusual trip came after 18 months of cancelled travel plans due to the pandemic.

“It was in the middle of lockdown that I got a level of wanderlust and a desire to get out of the house a bit,” says Jo. “I’ve always loved travelling, whether that’s in Britain or in Europe, by bus or by train.”

The council worker meticulously studied maps, timetables and routes to work out how far he could go in a single day. He predicted that Morecambe in Lancashire was the furthest he could make it.

Then one day in August, he decided to make the hypothetical challenge a reality by setting off on his bus-only journey. Thousands of people watched him share his progress live on Twitter, wishing him well and even suggesting landmarks to visit as he went.

“It went viral on social media and people seemed to really buy into it,” continues Jo.

“I've had a lot of people contact me who were self-isolating with COVID and this was just a really fun way for them to get through the day while they were stuck in a single room, as far from being able to travel as possible.”

So, it’s just gone 3am, and the odyssey begins. I’m at Charing Cross, the point from which all distances from London are measured, and the aim is to get as far a possible from here in 24 hours. And here’s my first bus, London’s fourth longest route. Start the clock! #bus24pic.twitter.com/xH9vnNJtcj

Starting at 3am, his first stop was Charing Cross Station where he hopped on one of London’s famous red buses to Heathrow. 21 hours and 24 minutes later, Jo completed his 418km journey right where he expected - in Morecambe.

The epic adventure provided him with a snapshot of people’s lives. Through Northampton and Leicester, it was an older crowd taking advantage of free bus travel. But by the time he reached Manchester, students on pub crawls were the main passengers.

“It's a very immediate and visceral way of experiencing the country,” says Jo. “From the very first bus I took, I realised just how vital public transport is for shift workers heading to work.

“The bus is the economic life of a lot of people. Morning commuters, day trippers or people going to the pub. It’s an incredibly interesting way of seeing a day in the life of the country, which you don’t get to see if you're shut off in a car or on a high speed train or up in the air.”

So, Preston bus station. Bloody awful. They should knock it down. JOKE. If a municipal building can be as stunning as this on a damp Friday night, it is a miracle. Shame the top floors are a car park, and it isn’t simply a temple to public transport, but that’s picky. #bus24pic.twitter.com/VpBGvcvYor

Jo was amazed by how many people took an interest in his passion project. As he rested in his hotel in Morecombe, he told his followers: “when I came up with this idea of a stupid, long bus journey just to amuse myself I didn’t think it would be of any interest to anyone apart from me.”

Instead, the travel phenomenon quickly became an internet sensation, with many people asking Jo where he planned to go next.

What is Jo’s next 24-hour transport challenge?

With #train24 behind him, the council worker is already looking into his next public transport odyssey.

With the two major forms of transit covered, he knows he’ll need to think outside of the box to top his last two adventures.

“Live tweeting from the seat of an aeroplane from London to New Zealand for 24 hours, I'm not sure it would make for very compelling viewing,” jokes Jo.

“There's a lot of ideas being thrown at me on social media, so perhaps I'll take another six months to think about what comes next. I might need to improve my navigational skills to do 24 hours on a canal boat or something like that.

“Whatever it is, I know I need to find something further.”

Watch the video above to find out more about Jo’s 24-hour transport challenge.

Watch this incredible footage of a jetpack-flying medic

Watch this man tightrope walk across France's most iconic landmark