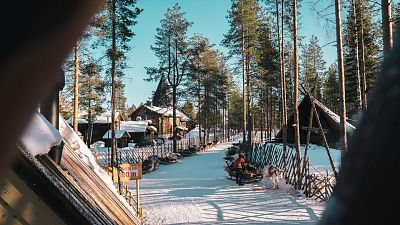 For the fifth year in a row, Finland has been named the happiest country in the world.

It was found to have the most satisfied population in a global poll for the latest World Happiness Report from the United Nations. In 2021, 9 million people were polled for the long-running survey.

Finland placed well above other countries in the top 10 including Denmark, Iceland, Switzerland and the Netherlands.

"Data considered in the World Happiness Report offers a snapshot of how people around the world evaluate their own happiness and some of the latest insights from the science of well-being," says Lara Aknin, one of the report’s co-authors.

"This information is incredibly powerful for understanding the human condition and how to help people, communities, and countries work toward happier lives."

An appreciation of the natural world, safety, security and trust are among some of the reasons people believe Finns are so content.

So how can visitors experience a piece of that happiness for themselves?

It’s easy to get out in nature in Finland

Around 75 per cent of Finland is covered by forest, meaning nature plays a big part in the lifestyle of its people.

The country has 40 national parks and from the centre of Helsinki, you can be in one in less than 30 minutes. Forests come in all shapes and sizes too, from lush woodlands in the south to Arctic landscapes in the north.

The legal concept of the ‘Everyman’s Right’ also means everyone, even visitors, has the right to enjoy the Finnish countryside regardless of land ownership.

When it warms up in the summer, the weather is perfect for camping and biking. Finland has a wide network of well-maintained roads perfect for taking a cycle tour. It is also sparsely populated meaning little traffic to contend with.

Hire a bike at one of many rental shops along popular routes and look out for services authorised by Parks and Wildlife Finland partners to find companies committed to the principles of sustainable tourism.

In winter, you can go skiing to enjoy the snowy landscapes. Finland is a mostly flat country but there are almost 100 resorts to visit, mostly in Lapland. Levi is one of the most popular choices, known for its ski slopes and the chance to see the Northern Lights.

Research has shown that spending at least two hours a week in nature is linked to good health and wellbeing. Just 15 minutes among the trees can also start to reduce feelings of stress.

So if you want to experience some of what makes Finland the happiest country in the world, then take a walk on the wild side in this Nordic nation.

How to destress in one of Finland’s 3 million saunas

Finland’s sauna culture has been added to UNESCO’s list of the intangible cultural heritage of humanity. It is also the only Finnish word to have made its way irreversibly into the English language.

There are roughly 3 million saunas in the country so it would be hard to miss this essential part of Finnish culture if you visit. While many people have their own sauna, there is a wide selection of public options in Helsinki ranging from traditional to more modern experiences.

They also vary in price too starting at around €10 if you don’t mind steaming it up with others to a couple of hundred euros for a private sauna booking. If online guides about etiquette have worried about going naked, there isn't really a wrong or right way to experience this piece of Finnish culture so relax and enjoy yourself however you feel comfortable.

It is a ritual that has been performed for thousands of years and people believe that boosts happiness and mental wellbeing. Finns refer to the feeling when you get out as ‘post-sauna bliss’.

Is it safe to travel to Finland?

Some of the reasons that Finland constantly tops the list of the world’s happiest countries are its low levels of crime and good public services.

These are also reassuring facts for anyone looking to travel to the country. Nothing says holiday stress more than having your wallet stolen in a foreign country.

You’re also very unlikely to get caught up in a major natural disaster as tornados, typhoons and earthquakes are pretty much non-existent. That doesn’t mean you shouldn’t take out travel insurance but it is one less thing to worry about when travelling to Finland.

Where to see the Northern Lights in Finland

Coming away from a week abroad with a significant memory to look back on is always a morale booster. What better way to do that than witnessing the magic of the Aurora Borealis.

Otherwise known as the Northern Lights, this natural spectacle is visible for roughly 200 nights a year in Finnish Lapland. You’ll have the best chance between September and March where the lights shine bright every other clear night.

If you want to take the guesswork out of the experience, you can sign up for the Finnish Meteorological Institute’s free email alerts. You’ll be sent hourly alerts when the magnetic conditions in Finland’s skies mean auroral displays are likely.

Whether it's the first time or the hundredth, Finns say the novelty never really wears off.

Forget Cappadocia. This city is the more chilled alternative for 2022

Brexit has slashed London's Eurostar capacity by almost a third