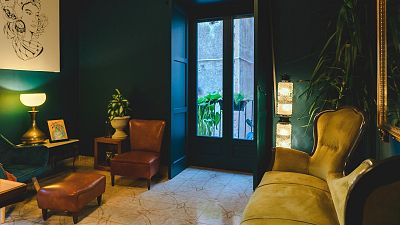 Tucked into an ancient side street of Sicily’s port city of Catania, a 19th century house is offering female travellers a stay with a difference.

Inside the building’s rustic exterior, this spacious, three-bedroom apartment provides guests with a fully-stocked kitchen, a shared garden terrace and a modern coworking space, optimised for the needs of the modern digital nomad.

This should come as little surprise to anyone who knows Michelle Titus, the New Yorker behind the project.

“I wanted to have a holistic place where women who were travelling or working could feel at home,” says Michelle, who lived in 18 different countries before settling in the Sicilian paradise.

When women stay here, they form bonds that will last.

“‘Cummari’ means ‘female friendship that is more like family’ in Sicilian. If you married into a family, your sister in law or mother in law would become your Cummari. And so for us, Cummari is that as well. When women stay here, they become friends and form bonds that will last when they're no longer here.”

As a traveller, Michelle spent 15 years living and working in countries around the world - from Singapore to Brazil, England to Australia.

But far from feeling at home, she discovered a lack of accommodation options centred around the needs of the modern female traveller.

Basic white IKEA everything, and no soul.

“It was always corporate apartments or short-term rentals that were really cold, with basic white IKEA everything, and no soul.”

This sense of disappointment inspired the former nomad to create a safe environment for solo travellers, focusing on the needs of women - without excluding men altogether.

“We prioritise women as guests,” says Michelle, “but that doesn't mean we totally exclude men from Cummari.”

“We love to have them visit, but this is a space for women carved out in the world just for them.”

Catania may be the perfect place to house an all-female live work space.

The ancient port city on Sicily's east coast is home to Mount Etna, Europe’s most active volcano and a symbol of femininity across Italy’s largest Mediterranean island.

“It's a very feminine city,” says Michelle, “and the volcano is feminine too. Etna is named after a fairy. And when the Greeks came, they were worshipping Goddesses from Egypt as well as their own.”

These parallels make Catania a perfect location for travellers who identify as female. For Michelle, it’s the reason she fell in love with Sicily in the first place.

Our guests are always finding secrets in this city.

“There are many places to visit on the island for female travellers that are interested in culture and history.

“This house is in the historic centre of what was once a mediaeval city. We're just on the edge of the sea, very close to where all the people of Catania go out on the weekends, go shopping or go to restaurants,” continues Michelle.

“There's a lot of museums and old palaces, so you never know what you're going to find when you walk out the door of Cummari. That’s why our guests are always finding secrets in this city.”

Michelle’s dream of creating a female-friendly co-living space first began in 2019, when she bought the abandoned house that was to become Cummari.

Collaborating with local artisans to produce bespoke furniture and murals, she renovated the building with a holistic approach, focusing on creating the luxurious charm of a boutique hotel.

“Formally, the house was owned by two sisters who lived here for a really long time. They really loved this house, and now we are continuing that sense of sisterhood and community as well.”

Evoking a sense of tranquillity, Cummari fills a gap in the market that Michelle longed for as a solo traveller - a home away from home that feels intimate, personal and secure.

“It’s a safe and relaxing space to come home to, and a social space as well. Most of our guests are single, so they are still going out and mingling and getting to know Catania and Sicily. But they like that they can come home here and not have to lock the door, or worry about going out to get coffee in the morning in their pyjamas.”

Women just seem to get it.

This sense of safety has proven popular with Cummari’s guests since the building’s opening in 2021. So far, the coliving space has attracted a diverse range of residents - from corporate clients in their 60s, to remote workers in their early 20s.

“We've had women from all over the world visiting,” says Michelle, “from New Zealand to Scandinavia, the United States to Southeast Asia.”

“We're not listed on Airbnb or booking.com, and our location isn’t listed publicly. News of Cummari is spreading by word of mouth.

“Women just seem to get it. So if you don't get it, you wouldn't stay here. But so many people do get it and they're the ones booking.”

For your chance to win a stay at Cummari, visit our instagram page here!

Watch the video above to see Cummari for yourself.

Italy: 7 stunning beaches to relax on this summer