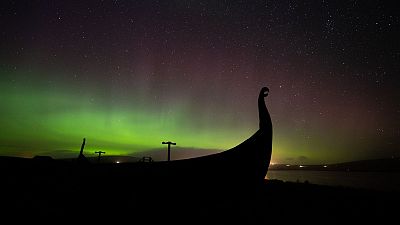 The 'Mirrie Dancers' behind a Viking longship on the UK's most northerly isle of Unst, Shetland.   -   Copyright  Robbie Brookes
By Lottie Limb  •  Updated: 03/03/2022

For most people, Shetland is somewhere they have yet to experience, a place which exists as a by-word for remote beauty, unique and separate from the mainland.

It’s for good reason, that feeling. These Scottish islands are as close to the Norwegian city of Bergen as Aberdeen, wearing their merged culture proudly. The archipelago lies 60 degrees north - in the crosswinds of the Atlantic and North Sea - and winter really drives that latitude home.

But I’ll say it now: for adventurous souls, I cannot recommend Shetland in winter highly enough. There’s no doubt the dark months are a tough slog for Shetlanders, who inhabit 16 of the 100 islands, but it’s a brilliant, bracing environment for a tourist.

From experiencing a magical light on the Cliffs of Eshaness, to enjoying the solitude of a purple, salty dusk at Jarlshof, there were so many spectacular moments on my February trip. With such a changeable and intense weather system, you can never really feel alone or bored here.

‘Find your true North’ is the tagline of the Promote Shetland campaign that took me here. Cheesy as it sounds, you don’t have to believe in magnetic theories to feel the truth of it.

You should visit Shetland in winter for…

Shetland’s winters are your best chance of seeing Arctic visitors in the British Isles, as well as its hardiest residents in action.

Though you might just happen upon a pod of orcas or a rare snowy owl, booking a wildlife guide will turn that luck into certainty, ensuring you’ll encounter one wonderful species or another.

Exploring the coastline of Unst, the UK’s most northerly isle, with Shetland Nature’s Brydon Thomason was a highlight of my trip. Shetland has the highest density of otters in Europe, and Brydon is an expert in their behaviours. We saw two in a loch within minutes of meeting off the ferry, sleek and engrossed in their prey.

“Be it feathered, flippered or finned, it is from regions of the frozen north that our hopes for an unexpected arrival are pinned.”

But wildlife tours aren’t just about ticking off a wishlist of animals. Good guides like Brydon lend you their eyes to experience the ecosystem in a more dynamic way; pointing out holts (the multiple dens that mothers build in rocks, roots and banks), crumbles of white crab shell, and the spraint (dung) otters leave as messages for each other.

Their diurnal feeding habits mean that winter is the best chance to spot otters in action - an upside of the short days, Brydon explains. Out at sea, Shetland has become one of the best places to see humpback whales, orcas and other cetaceans. While keen birders will delight in the snowy nomads you can spy at this time of year - including Gyrfalcon, Ivory and Ross’s Gull - and the bright-faced King Eider.

Equally unpredictable and all the more special for it, are Shetland’s wild skies. The ‘Mirrie Dancers’ (as the Northern Lights are known here) illuminate the night sky with shimmers of green, blue, orange and fuschia on a regular basis. Needless to say it’s the most reliable place in the UK to witness them; your chances over a week in winter are pretty good - enhanced by keeping an eye on AuroraWatch, and staying flexible and alert on clear nights.

There are many other reasons for gazing skywards on the islands too. Up on Unst, a sky trail is underway to showcase the year-round phenomena that a dark sky affords, from stars and storms to the ‘da simmer dim’ - the long twilight of a midsummer evening.

‘It’s an opportunity for people to do something really simple that they don’t always get the chance to do in their own environments,” says Jane Macauley, co-founder of Wild Skies Shetland. The community group is installing audio benches and posts in 13 of Unst’s most stunning locations, each with a different sky-related theme.

Stargazing is a “USP of winter,” meteorite hunter Fabian Kunst tells me. “We always have something interesting going on that you can enjoy regardless.” He was right: though my night in Unst was a cloudy one, we were able to pick out a 22 degree halo around the moon - a strange optical illusion made by ice crystals in the atmosphere.

A vivid sense of Viking history

Shetland is an archaeologist’s dream; with layers of prehistoric, Pictish and Viking remnants throughout the islands. From the mossy warren of life unearthed at Jarlshof in the south, to a fine replica of a Viking longhouse up on Unst, history feels strikingly present here.

Overgrown brochs - circular, drystone buildings from the Iron Age - dot the coastlines. Retired lighthouses too, now operated remotely from Edinburgh, are lovely outposts, providing a window into the islands’ seafaring past.

History isn’t just in the rocks, of course. It's written in the hearts and minds of people too. Norway gave Shetland to Scotland in the fifteenth century as a dowry during a dynastic marriage. But it wasn’t until 1881 that the islands’ famous fire festivals began. In a winter spectacle called Up Helly Aa harking back to their Norse roots, squads of Shetlanders follow a torch-lit procession through the streets before setting fire to a replica longship.

A hearty welcome and hospitality

Half of Shetland’s almost 23,000 population live within 10 miles of Lerwick, on the mainland. The town offers the widest array of eateries and shops along its winding lanes. Despite being vegetarian, I was swayed by my location to have some delicious scallops from No88, a lively restaurant just above Lerwick harbour.

I spent my first night at Ortolan House, which has to be one of the most elegant B&Bs I have stayed in. Though options thin out in other directions, the quality doesn’t diminish. Bonhoga Gallery Cafe, homed in an old water mill, is a gorgeous lunch spot. Further north, Busta House Hotel is a destination in itself - practically creaking with history, but offering a supremely comfortable night’s sleep. While up on Unst, chintzy Victoria’s Cafe is the place to be for soup, giant scones and hot drinks.

As an outlier in winter, people are interested to know about your plans and generous with their time and tips. It makes for an unusual and authentic experience as a tourist. Given the reduced footfall at this time of year, some places only open by request. I was already the proud owner of a Nielanell ‘snookie’ before my visit, and was very happy that the designer opened her shop of contemporary knitwear for me in Hoswick.

An insight into the world of crofting

Weaving Shetland’s history, archaeology, animals, food, land and hospitality together is Garth’s Croft on the isle of Bressay - just a few minutes from Lerwick by ferry. Run by professional archaeologist and crofter Chris Dyer, the smallholding is a model of sustainable farming featuring native and heritage breeds. Smartly-fleeced Shetland sheep are undoubtedly the stars of the show.

You can curate your visit here too. As well as giving a rundown of his holding, Chris offers tours of nearby sites of historical and natural interest around Bressay. I’ve no doubt this would be an equally rewarding trip, and certainly a more colourful one, during spring or summer.

Another thing the warmer months have going for them: the Shetland Pony Experience on Burra. I was lucky to get a glimpse into the barn and meet gorgeous Skerrie. Some mane brushing and an obstacle course ensued, but you’d typically have to arrive between April to September to get the full works, including an incredibly Instagrammable shot with you and a pony on the beach.

The moment I really ‘clicked’ with this holiday was standing alone on St Ninian’s Beach, 10 miles in my hire car from the airport. Hail suddenly switched to huge, blustery sunshine and I had an astonishing seascape all to myself. The beach is a tombolo - a sandy strip of land that connects the mainland to St Ninian's Isle - and that morning the two sides were lapping fiercely over each other.

The second time I was struck by the scale of the islands was on top of the Cliffs of Eshaness, with another great, multi-knowledgeable guide, Drew Ratter. It’s impossible not to feel rearranged up there, with the vast Atlantic crashing below, sea spray curving up the rock face and showering you in horizontal rain.

How to get to Shetland from Europe

You can travel to Shetland from mainland Scotland by ferry or plane. The boats are operated by Northlink Ferries and take around 12-13 hours from Aberdeen to Lerwick, so most opt to travel overnight - with fares ranging from £18 (€22) for a sleeping pod to £110 (€132) for an executive cabin during low season.

Flights go frequently from Aberdeen, Glasgow, Inverness and Edinburgh - taking around an hour and a half from the capital, some with a stop off in the Orkney Islands’ Kirkwall. Planes also fly from Bergen, Norway in the summer - see Loganair for more details.

Cruises come to Shetland too, mostly docking in Lerwick harbour. But a day hardly feels long enough to do justice to the islands’ many wonders.

Though there are buses between key places (including a regular one from Sumburgh Airport to Lerwick), hiring a car is the easiest way to get around. In fact, driving was one of the pleasures of the trip for me - with varied open roads, and sea, hills and lochs always in your periphery.