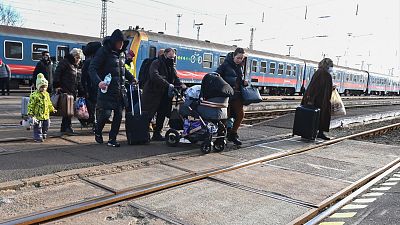 Refugees arrive from Ukraine at the railway station in the Hungarian-Ukrainian border town of Zahony   -   Copyright  Attila KISBENEDEK / AFP
By Euronews Travel  •  Updated: 02/03/2022

More than half a million people are thought to have fled Ukraine to neighbouring countries since Russia launched its invasion on 24 February.

Countries around the world have opened their borders to refugees in response - with the European Union leading the way. According to EU and French officials, at least 300,000 Ukrainian people have so far entered the bloc and countries should be prepared for millions more as the conflict escalates.

Many European countries have relaxed their entry and visa requirements for those fleeing the war. So what are the new rules?

Countries with no change to their policies may still be welcoming refugees, Many already had relaxed entry and visa requirements for Ukrainian nationals before the war.

Since 2017, Ukrainians with biometric passports have been able to travel to the Schengen Zone and stay for 90 days out of every 180 without needing a visa.

On Sunday, EU internal ministers met and agreed to allow all Ukrainian refugees to remain in the EU for up to a year without having to apply for asylum first. This can then be extended twice for six months and the EU can also extend this by another year if the war continues. In total, the protection can last up to three years.

"Most of Ukrainians coming now, they are coming with passports that give them visa-free entry for 90 days. But we have to prepare for day 91," European Commissioner for home affairs Ylva Johansson told Euronews.

The European Commission is ready to activate a never used before mechanism called the Temporary Protective Directive that would help EU countries to manage and share applications from Ukrainian nationals. It is intended to help when traditional asylum systems are overwhelmed by a mass arrival of refugees.

Temporary protection doesn't mean that a person is granted asylum but individuals can apply at any time during their stay. Children enrolled in the education system and people with health conditions may be allowed to stay after temporary protection expires.

Due to opt-out clauses, Ireland and Denmark are not bound by this legislation.

Hungarian Prime Minister Viktor Orban has said the country is accepting all citizens and legal residents of Ukraine.

“We’re letting everyone in,” Orban announced on Friday.

Ukrainian people escaping the war may also be allowed in - in the absence of a biometric passport or other travel documents - after an individual assessment of other identification documents.

Ireland announced on Friday 25 February that it was immediately lifting visa requirements for Ukrainians.

“People who are considering leaving Ukraine and travelling to Ireland may for the coming period do so without a visa if they judge it safe to travel,” says a press release from the Irish Ministry of Justice.

“Those who travel to Ireland without a visa during this period will then have 90 days after arrival to regularise their position. This position will be kept under ongoing review with the impact monitored closely.”

Moldovan President Maia Sandu said on Twitter that the country’s “borders are open for Ukrainian citizens who need safe transit or stay”.

First ?? citizens arrive in ??, with over 4000 crossings today. The govt has deployed temporary placement centers near Palanca and Ocnița. Our borders are open for ?? citizens who need safe transit or stay. pic.twitter.com/F0NsQcKx02

A state of emergency means that Ukrainian citizens will be let into the country even if they don’t have passports. They can cross the border with domestic IDs.

While many people seeking refuge have travelled on to the EU, at least 100 have applied for asylum in Moldova.

Poland is allowing entry to anyone from Ukraine, even those who don’t hold valid passports.

Officials have announced that nine reception centres will be opened along the country’s 535 km border with Ukraine, to offer meals, medical care, a place to rest and information for those fleeing the invasion.

Ukrainian citizens can currently enter Romania with a biometric or simple passport at border crossing points. Those who apply for asylum can also enter with another form of identification, including national ID cards and birth certificates.

This can be submitted by any foreign citizen directly at the border crossing point.

Ukrainian citizens can also enter without documents on the basis of declared identity for humanitarian reasons.

The Slovakian Ministry of the Interior announced that all Ukrainian refugees will be permitted to enter the country - even those who don’t have valid travel documents.

“After an individual assessment, we will also allow entry to the territory of the Slovak Republic to persons who do not have a valid travel document (biometric passport),” a press release from the Ministry reads.

It also made provisions to declare temporary refuge “for the purpose of protecting aliens [non-Slovakian nationals] from war” with all persons fleeing allowed to stay in Slovakia for 90 days.

Now the UK government has expanded this to include anyone who is an adult parent, grandparent, child over 18 or sibling of a Ukrainian national living in the UK. But those without relatives in the country will still not be allowed to travel to Britain.

A new visa sponsorship route will allow British businesses to bring Ukrainian citizens to the UK.