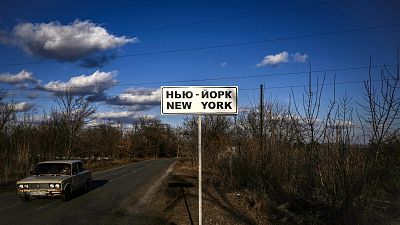 The former Soviet town of Novgorodske has reverted to its original name - New York - in a defiant response to the threat of Russian invasion   -   Copyright  AFP
By Ben Anthony Horton  with AFP  •  Updated: 22/02/2022

In Ukraine, the town of Novgorodske has reverted to its original name - New York - in a defiant response to the imminent threat of Russian invasion.

The war-torn settlement, which stands on the edge of the frontline in eastern Ukraine, was stripped of its unique heritage by Soviet officials in 1951.

Novgorodske - or ‘new city’ in Ukrainian - has been at the forefront of the conflict for the past eight years, as Ukrainian forces hold back Russian-backed separatists at the nearby border.

Now locals are reintroducing the town’s historic name - although little is known about how this unique Americanism came to be.

"It's a mystery that still hasn't been solved," says Tetyana Krasko, head of the New York Cultural Centre, Ukraine.

It represents a solitary act of resistance against the masses of Russian forces encircling Ukraine on every side.

She believes the original name may have come from a group of German settlers in the 1800s - but for now, it represents a solitary act of resistance against the masses of Russian forces encircling Ukraine on every side.

"We tell ourselves that they would be too afraid to bomb New York," Krasko laughs, before turning gravely serious.

"It's not funny. There have already been shellings. New York has already suffered."

So far, the conflict has claimed the lives of more than 14,000 people and pushed 1.5 million others from their homes.

The town once boasted a population of over 10,000 people, but now many of the houses stand empty. Those who remain have dark thoughts about the days ahead.

"Living here is very difficult,” says Ella Pylypenko, a housewife from the settlement.

“Firstly because there is nowhere to work, the wages are low and there are these bombings. It's not easy to live here."

About 25 kilometres south of New York lies Donetsk, the rebel stronghold formally recognised by President Vladimir Putin in a recent address to the Russian nation.

War is a familiar backdrop to everyday life in this part of the world.

His decision sparked outrage in the international community, but for many locals, the announcement came as little surprise. War is a familiar backdrop to everyday life in this part of the world.

"I've seen it all before," says Klava Blynska, an elderly resident shouting from her balcony.

“They are idiots. Why did they make this decision? What’s the point?”

Some locals believe the town’s name could change again if Russian forces push further into Ukraine. But for many of the settlement’s younger residents, evacuating the town is more important than renaming it.

"We'll grow up and maybe we can leave here,” says Sergei, a local college student.

“I don't know if it makes sense to stay here any longer. I don't know how long the war will last. So we'll have to get out of New York soon."