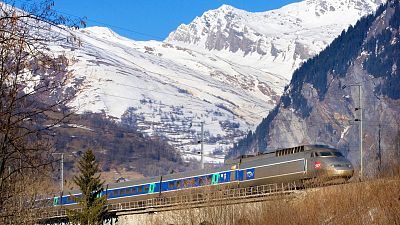 SNCF services between Paris and Geneva take just under three and a half hours   -   Copyright  Voyages SNCF
By Ben Anthony Horton  •  Updated: 19/02/2022

The average flight to the French Alps emits just over 122 kilograms of CO2 per passenger.

This isn’t taking into account the carbon cost of travelling to and from the airport, nor the heavy emissions of the ski industry itself, which attracts over 50 million tourists to France every year.

It’s little surprise, then, that many skiers are looking to find a greener option for their journey to the slopes.

And with an equivalent train journey producing up to 90 per cent less CO2 per person - 12 kilograms, to be exact - could the humble locomotive offer the most climate-friendly solution to reaching our favourite ski resorts?

I took the slow train to the Alps to find out.

After waking up at 6am, I took the tube to London St Pancras - the first of five trains which would carry me from grey London to the snowy Alps.

A stream of sleepy commuters flooded the carriage, but it wasn’t long before I reached the Eurostar terminus and made my way onboard.

Easy check-in, comfy seats and free wifi were just some of the perks of opting for the train over the plane.

And after enjoying a complimentary coffee, I got on with some work as the train glided beneath the English Channel and deposited me at Gare du Nord.

Unlike flying - where post-arrival queues can take an eternity - Eurostar’s customs checks are completed prior to boarding. This means passengers can leave the station immediately after arriving.

For me, this involved a brisk walk down the platform and a short metro ride to central Paris, where I planned to grab some lunch ahead of my connecting train.

I strolled along the Seine, browsed the shelves of the Shakespeare and Company bookstore, and found some food at a cafe overlooking Notre-Dame.

It was as good a time as any to reflect on my journey so far.

If I’d caught a flight, there’s little doubt I would have arrived at my destination already. Planes, after all, are faster, cheaper and more convenient - providing direct access to every conceivable destination in the world.

But as we all know, catching a flight isn’t all smooth sailing.

Check-in queues, baggage fees and security restrictions are just some of the concerns facing travellers who choose to fly. And while practical issues like these discourage air transportation, the experience is worth considering too.

Airports are not friendly places. At best they are acceptable; at worst, diabolical. They offer an irksome array of automated processes, uncomfortable seating and overpriced meals. Most passengers seek to spend as little time in them as possible, opting for expensive upgrades to expedite the check-in process and ensure they board the plane before anyone else.

Trains boast a unique charm grounded in the country and culture they are travelling through.

Trains, on the other hand, boast a unique charm grounded in the country and culture they are travelling through.

Think of Paris, where the great arches of Gare du Nord stretch high above the tracks. Or London, where each tube line boasts its very own fabric embossed across the seats.

Features like these make a traveller feel, well, like they’re travelling - a far cry from the artificial limbo of air transportation.

While airports are tucked away in the farthest corners of every city, rail passengers are able to alight in the middle of the action - a short walk from hotels, tourist destinations, and in my case, my next train.

From France to Switzerland - and back again

After my leisurely lunch in the French capital, it was a short walk along the Seine to reach the next station of my trip - Gare de Lyon.

From here I caught the 14:18 TGV Lyria service between Paris and Geneva, a three and a half hour commute connecting the city with the slopes.

Along the way I did what every long-distance rail passenger does. I slept.

It was the kind of nap I’ve had only a handful of times in my life - a sleep so memorable that I can barely recall how long it lasted or precisely when it began.

I awoke to dramatic views of the sun setting across the French Alps, as the train rounded a series of frozen lakes and snaked between an array of bucolic, snow-capped towns.

Before I knew it, I was pulling into Geneva central station ready for the next leg of my journey - a five-minute rail connection to Geneva airport.

This might seem like an unusual destination for someone seeking to avoid aviation. But with flights by far the most popular way of reaching the slopes, the vast majority of transfer services still operate out of the airport, providing direct connections with the region’s top resorts.

A little over forty minutes later, my driver from Skiidy Gonzales was whisking me back across the French border and up into the Alps - all in time for a spot of dinner and a drink before bed.

In total, my train journey to the Alps took eight hours and cost over €300. The equivalent journey via plane would have taken four hours, with an average return price of just under €140.

With the figures well in favour of flying, the question remains: why are more and more people opting for the slower, less convenient mode of transportation?

After getting home, I spoke with Daniel Elkan from Snowcarbon, an independent travel expert who is seeing an increase in people catching the train to the Alps.

“Skiers are waking up to the fact that they don’t have to spend hours in airport queues, cramped flights and transfers,” says Elkan.

“They could be sitting in a comfortable train carriage with their friends or family, with scenery gliding by - at a fraction of the pollution and emissions of flying or driving.

It’s vital that skiers who care about the planet - as well as snow levels - think about how they travel to ski resorts. It’s a collective effort to transform the way we travel.

“It’s vital that skiers who care about the planet - as well as snow levels - think about how they travel to ski resorts. It’s a collective effort to transform the way we travel.”

This feeling is echoed in the resort of Morzine, which is experiencing the full force of the climate crisis on its slopes.

Montagne Verte - an environmental charity based in the resort - has put together the ‘AlpinExpress Pass’, a discount card providing train passengers with cut-price accommodation, transfers and ski hire throughout the region.

“But we can still have a huge impact in the actions we take, and encouraging people to get the train over the plane is one of the sustainable ways we can better protect our ski pistes.”

For Elkan, "it's crazy" that incentives like these are only just becoming available in the ski industry.

"These discounts [...] offer social proof that businesses in Morzine would prefer people to come by train," says the travel expert.

"There's so much potential. It's just not being realised yet."

Watch the video above to see the journey for yourself.

Meet Miffy the travelling bunny: A ‘tailblazer’ in his field