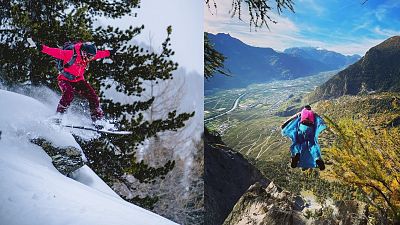 Géraldine's choice of sports keep her in the mountains all year round   -   Copyright  verbier.ch / @geraldinefasnacht
By Hannah Brown  •  Updated: 17/02/2022

Welcome to Euronews Travel’s Women Beyond Borders, the series which brings you real life accounts from women around the world who are living brave, adventurous lives, and conquering personal challenges on the road. These women live for travel and adventure.

While some are crossing the world in pursuit of the most unique experiences, or pursuing a lifestyle that many would dream of, others are breaking the mould of traditionally male-dominated industries. We want our series to inspire you to believe in the power of your own dreams.

When you think of base jumping and freeride snowboarding, you think of adrenaline junkies, but it’s not the adrenaline Géraldine Fasnacht is addicted to, it’s the mountains.

The 41-year-old from Lausanne, Switzerland first hit the slopes when she was just two years old. At 15 she set her sights on competing in the Verbier Xtreme - one of the most extreme freeride competitions in the world. And at 21, she quit her job at Geneva airport to move to Verbier for one year to see if she could make it as a pro snowboarder.

When she arrived in Verbier, an incredible but expensive ski resort, she found two jobs to help fund her dream. Géraldine spent her days training on Verbier’s famous slopes from 8am - 1pm, working in a travel agency from 2-6pm and in a pizzeria from 6pm-midnight.

“I was so passionate about snowboarding and so passionate living in my dream place Verbier that for me it was not a problem to work so hard and not sleep so much,” says Géraldine.

It was March 2002 when Géraldine’s life changed. She was the newcomer entry at the Verbier Xtreme and she won aged 21. The one year she had given herself in Verbier to try to become a professional snowboarder soon became a second and a third and a fourth.

“And after eight years competing on the world tour and 11 wins on the different stops of the World Tour, three times the Verbier Xtreme and over 23 podiums, I decided to stop my competition career,” Géraldine explains.

Instead she took the time to travel more, do some of her other hobbies and go on expeditions.

“The mountain environment is my place. I love to be in nature,” says Géraldine.

And it’s this love that drove Géraldine to look for a sport outside of snowboarding to keep her in the mountains all year round.

“I started wingsuit flying. So flying with these beautiful wings, beautiful suits that make you fly much further and play with the ridges of the mountains,” she explains.

“And for me, it was the best parallel I could find to snowboarding.”

Her base jumping and wingsuiting have taken her all over the world.

In 2009 Géraldine was the first person to base jump in Antarctica and has opened countless other jumps across the world in Iran, France, Canada and her home, Switzerland.

“Being able to be the first person on Earth to open the summit of the Matterhorn with my wingsuit was an extraordinary feeling.”

“Looking at the Matterhorn for me is my home.”

Géraldine’s third hobby is flying. And not just in her wingsuit. She’s also a qualified pilot.

“Flying was a dream since I was a kid but it came much later,” says Géraldine.

“I fly ultralight planes because it uses less gas than a car,” Géraldine explains.

“I love to be in the mountains, but I don't wa[...] when I land on the glacier really often people come to me and ask, ‘Is this a plane’?”

According to Géraldine her three passions - snowboarding, wingsuiting and flying - are all strongly interconnected.

She snowboards in the winter and wingsuits in summer. And in between she uses her ultralight plane to explore the mountains and find new routes to explore by board or jump.

A woman in a man’s world

When Géraldine first started base jumping she was just one of six women in the world doing it.

To go out on a jump required hours of hiking up a mountain with equipment and plenty of snacks (incase conditions are poor and you have to hike back down again) and her male counterparts always insisted that if she wanted to join them she had to keep up.

Speaking of her expedition to Baffin Island, Canada, Géraldine says:

“I trained so much and I trained on the Grand Combin, all the high peaks around Verbier so much that when I arrived in Baffin Island on these low level mountains, I was full of energy.”

“Most of the time I was carrying everything and I was not the one behind.”

Géraldine thinks this determination to prove herself is what pushed her to train harder and be one of the best. And now, when she invites her friends to join her freeriding or base jumping, they worry they might not be able to keep up with her.

The secret to staying safe in extreme sports?

Preparation, knowing your limits and being willing to forgo an activity if the conditions are bad, even if you’ve spent all day getting there are the rules that keep Géraldine safe.

“I'm super strict on my preparation. I'm super strict on my achievements. And this is probably why I am still here today because if you're not really concerned about what you're doing and so strict on really exposed, exposed stuff like opening a new cliff or doing a steep face with your snowboard…this is something really serious and you have to prepare really well.”

When we asked Géraldine what she considered to be her greatest achievement (and there are a lot to choose from), she replied simply ‘my baby’.

Which is quite beautiful.

Watch the video above to learn more about Géraldine.

Take a look at the Netherlands' extreme canal vaulting sport