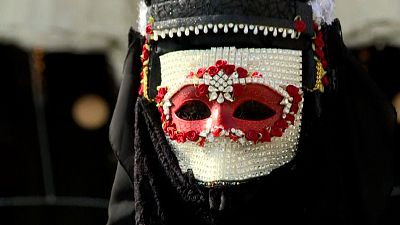 It’s been three years since Carnivale di Venezia, or Venice Carnival last took place. Though not as big or grand as in previous years, visitors and revellers still flocked to the city for the start of the 18 day festival.

“Last year the square was completely deserted, all the shops were closed, it was really sad and ghostly,” says Matteo Troppina, a carnival reveller dressed in classic 18th century costume.

During the first weekend of events, dozens of traditional boats illuminated by coloured lights and fires glided down the Grand Canal to the sound of drums.

The parade, led by the "pantegana", a boat with a giant water rat, was announced at the last moment to avoid drawing large crowds of spectators typical at the event before the pandemic.

Despite this, Venice Carnival’s organisers say that over 100,000 people attended its first two days - more than half of them foreign tourists.

“This parade wants to send a message to the world, that Venice is alive, the Carnival is here and we hope to come back at full swing next year,” explains Massimo Checchetto, Art Director of Venice Carnival.

“But for the time being [this is] a little taste of the Carnival.”

COVID-19 safety regulations changed in Italy just in time for the carnival. Masks are no longer required in outdoor settings from Friday 11 February.

Though the Carnival’s return is something to be celebrated, some of the most awaited attractions, such as the Flight of the Angel and the Venice Carnival Costume Competition, were still cancelled this year amidst ongoing Covid-19 concerns.

What is the Venice Carnival?

Though history suggests the festival dates back as far as 1162, the modern day version of Venice Carnival began in 1979.

The carnival lasts just over 2 weeks and is filled with parades, balls and shows. The final day of the festival is Shrove Tuesday - this year that’s 1 March - ready for the start of lent on Ash Wednesday.

Watch the video above to see Venice Carnival in action.

Italy: 7 stunning beaches to relax on this summer