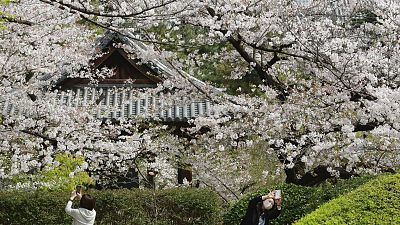 Japan’s borders could be set to reopen in March after being closed to tourists for two years.

Europeans are currently only allowed into the country in exceptional circumstances. The rules for overseas students and business travellers were temporarily eased in late 2021 but borders were quickly closed again in response to the spread of Omicron.

The tight restrictions are set to expire on 28 February. And, though they could be extended again, the government is reportedly inclined to let them end, according to Kyodo News.

This will be welcome news to tourism organisations and those keen to return to the beautiful island country.

Almost 3 million overseas residents visited Japan in April 2019, when the cherry blossoms are out in all their splendour. If restrictions do ease significantly at the end of this month, springtime visits are sure to surge again.

How could Japan’s travel rules change?

The European nations and the UK are on a long list of countries from which travel to Japan is not typically permitted, except for special reasons outlined by the Ministry of Foreign Affairs.

Foreigner visitors who do qualify for a visa (family members of Japanese nationals, for example) have to take a PCR or quantitative Covid test 72 hours before departure, before undergoing a seven day quarantine period.

The government is looking at shortening this to three or five days for boosted visitors, or those who can present a negative test.

They add that the cap on the number of overseas entrants each day could rise from its current limit of 3,500. Until November 2021, up to 5,000 visitors were allowed in daily before restrictions tightened again.

"We will take into account accumulated scientific knowledge on the Omicron variant, changes in infection conditions inside and outside Japan, and other countries' border control measures," Prime Minister Fumio Kishida recently told reporters.

Though he indicated that the government will consider easing the ban, the PM declined to elaborate.

It seems likely that having a booster jab will be one requirement of visiting the country, with time limits on vaccine passports - similar to the measures introduced by the EU earlier this month.

Arrivals from Australia, New Zealand and some Pacific countries are currently allowed to Japan, and their journeys could also become easier if restrictions are eased.

At present, Australians have to complete three of their seven day self-isolation periods at a designated quarantine facility.

You can find further information and updates from the Ministry of Foreign Affairs here.

These six European cities have the best Christmas markets in 2022