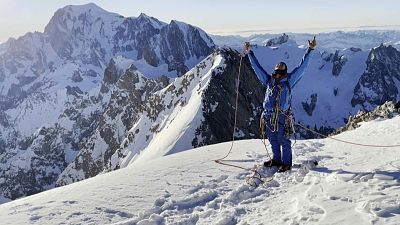 Alpinist and high mountain guide Charles Dubouloz has become the first person to successfully make a solo winter ascent of the north face of the Grandes Jorasses, a mountain in the Mont Blanc region.

Over the course of the climb, temperatures dipped as low as -30C and according to Charles he lost his mobile phone somewhere enroute.

More about the Grandes Jorasses

Grandes Jorasses is a 4,208m mountain in the Mont Blanc massif.

Situated on the border of France and Italy, the north face, which Charles climbed, is in France. And along with the Eiger and the Matterhorn (both in Switzerland) is considered one of the ‘the trilogy’ of greatest north faces in the Alps.

Watch the video above to see this stunning feat.