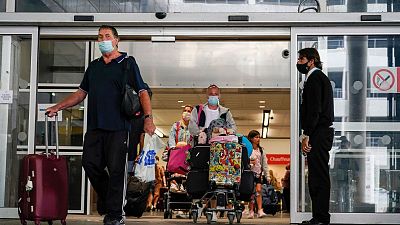 Passengers arrive at Gatwick Airport in London. This summer, no tests will be required from vaccinated travellers.   -   Copyright  AP Photo/Alberto Pezzali
By Euronews Travel  •  Updated: 25/01/2022

People travelling to England will no longer be required to take a COVID test on arrival, the Prime Minister has confirmed.

The day 2 tests - which currently have to be taken within 48 hours of touching down in the UK - are set to be scrapped from 11 February in the latest easing of travel restrictions.

It follows the end of pre-departure tests earlier this month, and the relaxation of post-arrival tests from PCR to antigen ones.

Transport Secretary Grant Shapps confirmed yesterday (24 January) that all testing measures are to go, just in time for the UK's half term holiday the following week. He attributed it to the success of the UK's vaccine and booster roll-out.

In a move welcomed by the UK travel industry, the PM said that tests are being got rid of “to show that this country is open for business, open for travellers.”

The rules for unvaccinated travellers have also eased significantly; they will only need to take a PCR test on or before day 2, in addition to a pre-departure test. Currently, a test on day 8 is also required.

Scotland, Wales and Northern Ireland have yet to announce whether they will follow suit but are likely to unify their approach as they have with previous updates.

EasyJet chief executive Johan Lundgren said, “We welcome this news knowing that millions of our customers will also be delighted to see the return of restriction-free travel in the UK. We now look ahead to what we believe will be a strong summer.

“We believe testing for travel should now firmly become a thing of the past,” he added. “It is clear travel restrictions did not materially slow the spread of Omicron in the UK and so it is important that there are no more knee jerk reactions to future variants.”

What are the current UK travel rules?

Under the current rules, holiday-makers and returning Brits must take a lateral flow (antigen) test between day 0 and day 2 after arriving in the UK. If positive, they must self-isolate and take a PCR test to confirm the result.

There is no rule forcing people to report the results of their post-arrival test, however. So to an extent, the rule change continues to depend on individuals taking responsibility.

As virologist Dr Stephen Griffin told the BBC last week, “you have a moral responsibility to monitor and to know if you’re infectious.

COVID-infected people in England may soon not have to isolate

World's first net-zero transatlantic flight could be just months away

1p summer holidays are up for grabs in Greece, Spain and Cyprus

Arabian Travel Market: Where to go in the Middle East that’s not Dubai