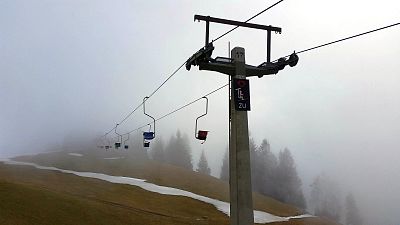 At the small resort of Schnepfenried in France, exceptionally mild temperatures and scarce snowfall are threatening the future of this famed ski destination.

The resort - which currently holds the title of best small ski area in Europe - has been forced to shut four of its seven slopes, resulting in dwindling visitor numbers. It is now facing the imminent threat of closure.

With no snowfall reported in December 2021 and temperatures well above freezing, employees are having to transport snow down the mountain to ensure the ski lifts remain accessible.

"The weather conditions were very particular with a lot of rain and wind,” admits Nicolas Buhl, Manager of the Schnepfenried resort.

The direct impact of climate change

2021 saw France’s warmest end of year on record, with temperatures ten degrees higher than average in some regions.

The effect of climate change has been stronger on winter temperatures, making snow increasingly rare at ski resorts below 1,500 metres.

Research from the University of Grenoble found that almost half of the 169 ski resorts that have closed since 1951 went out of business due to lack of snow.

Between 2014 and 2018, ski resorts in the Alps saw a below-average early season snowfall, according to data from Savills. These world renowned destinations attract nearly 43 per cent of all skiers globally.

“Snow conditions should not be taken for granted, especially at low to middle altitude,” says Dr. Samuel Morin, snow and climate scientist at the National Center for Meteorological Research (CNRM).

The mild weather has also increased the risk of avalanches in some regions.

Claude Schneider, a ski patroller and rescue worker in La Plagne, observes the snow cover several times a day, and the heavy rain worries him.

According to environmental scientists, the succession of warmer winters is a direct impact of climate change.

This may lead to serious consequences for the wintersport industry, which relies on consistent snow conditions to attract tourists from around the world.

For the skiers who remain at Schnepfenried, the shortage of snow is already leading to holiday disappointment.

"This is the first time that we come here", explains Mirjam Stevens, a 34-year-old skier from the Netherlands visiting with her husband and their two children.

"For us, it's a little disappointing that the mountains are showing the green grass instead of the snow. If the temperature goes up and up [...] that will definitely have a lot of impact on the resorts positioned below."

With shorter winters and continued snow shortages expected to threaten the ski industry for years to come, resorts are now looking at alternative attractions to draw in the crowds.

"This is something we have been thinking about for several seasons,” explains Buhl.

In 2013, Schnepfenried opened a tree climbing course and improved its offering of accommodation to appeal to customers throughout the summer months.

"The idea is also to be able to employ people longer during the year. So to allow this kind of hiring, we will have to find alternative activities that are spread out over the year."

Watch the video above to see France’s snow shortage.

Are there travel restrictions for monkeypox virus?