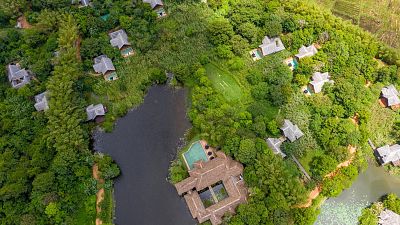 Jetwing Vil Uyana in Sri Lanka is more like a wildlife sanctuary than a hotel, according to its experiential manager Chaminda Jayasekara.

The 11-hectare site is home to hundreds of animals including around 150 species of birds, rare wildcats and nesting crocodiles. But the land around Vil Uyana wasn't always like this.

"When the guests are coming here, they might think that we built this hotel in a forest area," Jayasekara says, "but the story behind this is totally different, because we created the land and we created the habitat for the wildlife species."

Over 95 per cent of the trees on the site today have been planted since hotel construction began in 2003. Before that, Jayasekara explains, much of it was used for agriculture or simply left as a wasteland.

Three of the four wildcat species found in Sri Lanka now live within this restored ecosystem. Jayasekara adds that much of the wildlife attracted to Vil Uyana is now breeding too, helping animal numbers to increase.

Surveys have shown that biodiversity has increased significantly over the past 15 years, since the hotel was built. Its two lakes have become a haven for animal species during the dry season too, when other water sources often dry up.

"Even the crocodile and the loris, even the fishing cat, all the species were attracted here after we created the place, after we create this wetland," Jayasekara explains.

A unique wildlife experience for guests

Many visitors to the eco-hotel come especially to witness its blossoming biodiversity. Sri Lanka is thought to be one of the best places in the world for tourists to experience wildlife, and guests at Vil Uyana are invited on tours so hotel staff can share details about its conservation initiatives.

Many of the animals can be spotted from the balcony of their rooms too, on the walk to the restaurant, or even while visitors are checking in at reception. Sharing his love of the natural world is something of a passion for Jayasekara who started as a trainee in 2008.

"In the tourism industry, when the guests are doing their tours in the country, most of the time they focus only on big animals like elephants, leopards or bears," he says.

"They are not concerned about smaller wildlife species, but there are so many things to experience in the country."

That includes spotting Jayasekara's favourite rare nocturnal primate, the slender loris. Vil Uyana has become one of the best places in Sri Lanka to see this elusive endangered animal. So much so that both National Geographic and the BBC have come to the hotel specifically to film them for nature documentaries.

The hotel is doing more than preserving the local natural environment too. Personal vehicles are not allowed on site either, with guests ferried around by electric buggies. Staff even use bicycles to carry towels and fresh bed linen to the rooms too.

Plastic water bottles have also been removed from the rooms, which are located across its five unique natural habitats. With thatched roofs and open sides, the hotel is designed to let nature thrive - and allow guests to experience it.

As Jayasekara concludes, "when we are close to the nature, we can live freely."

To find out more about booking a stay at this exclusive Sri Lankan eco-hotel, visit Jetwing Vil Uyana's website here.

The top 7 hotels in Italy, Spain and Greece, according to Tripadvisor

Sustainable living is made easy at these gorgeous eco stays

Inside the invisible holiday home that mirrors the Californian desert