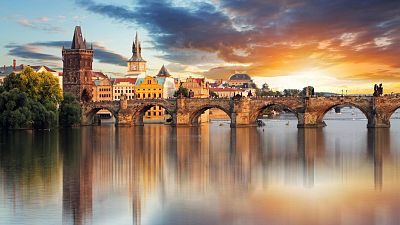 The pandemic has seen many of us make major life changes - whether that’s moving to the countryside or buying a dog - but have you ever considered working in another country?

With so many jobs shifting online, working remotely is now easier than ever. The digital nomad lifestyle has really taken off in the last few years, and many countries are now keen to attract remote workers to their shores.

So whether you’re looking for a new career entirely, or work for a company that doesn’t mind where you’re based, picking the right location is key if you want a great work-life balance.

Expat Insider have ranked the best - and worst - places to work, based on surveys with expats who already live there. So if you want to avoid job insecurity and find the destination with the best work culture, you’ve come to the right place.

What are the worst places for workers?

According to Expat Insider’s Working Abroad Index, which includes 59 destinations, Cyprus is the third worst country, while Italy comes in second and Turkey is rated worst of all.

Turkey has been in the bottom 10 since 2017, and in 2021, twice the global average of émigrés were dissatisfied with the local economy - that’s 43 per cent compared to 19 per cent worldwide. The country is currently struggling with an undervalued currency as well as the impact of the pandemic, so it’s not surprising that some are unhappy.

Turkey also performed badly in the work and leisure subcategory, with 32 per cent of workers frustrated with their working hours. This is twice the global average of 16 per cent.

Turkey also performed badly in the work and leisure subcategory, with 32 per cent of workers frustrated with their working hours. This is twice the global average of 16 per cent.

A Brazilian respondent living in the country finds the, “collapsing currency, conservative and strict values at most workplaces, and long working hours,” particularly difficult.

Showing that respondent feelings can be highly subjective, however, data reveals that expats in full-time positions in Turkey actually work fewer hours than the international average - 41.9 hours per week in contrast to 43.2 hours.

Italy has consistently ranked in the bottom 10 since the survey began back in 2014. In 2021, those living and working here were disappointed with local career opportunities, and 56 per cent rated these negatively compared to 33 per cent globally. While 22 per cent describe the situation as ‘very bad’.

42 per cent also gave Italy’s economy a negative rating, only marginally less than in Turkey. This is to be expected though, as the country’s unemployment rate is relatively high at 9 per cent.

Cyprus is a mixed bag

The situation in Cyprus is more mixed, with around half of respondents - 52 per cent - generally satisfied with their jobs, compared to 68 per cent worldwide. This compares to 19 per cent who are completely dissatisfied, a figure that is just 5 per cent globally.

The country also ranks bottom when it comes to job security, with 22 per cent of those surveyed saying they are very unhappy in this area.

Where should I move if I want a great work-life balance?

It may not come as a surprise that two Scandinavian countries take the top spots in the Work and Leisure subcategory.

The Danes do it best

New Zealand comes second overall in the Working Abroad Index and fourth when it comes to work-life balance. 83 per cent of the expats surveyed were generally fulfilled in this area - compared to 66 per cent internationally.

Just over four in five people rated their job security favourably too. And if you’re looking to change career, 64 per cent of those polled thought that local career opportunities were positive.

Where to avoid working as an expat

If you’re hoping to harmonise your work and leisure time, the findings suggest you should avoid Kuwait and Japan.

In Kuwait, 12 per cent of respondents were very displeased with their work hours, compared to just 4 per cent internationally.

What are the best places to work overall?

There can be only one winner, and in 2021 Taiwan took the top spot in the Working Abroad Index. Those polled were happy with their job security - with 83 per cent generally satisfied in contrast to 61 per cent internationally. In fact, a whopping 40 per cent were completely satisfied too.

An enormous 85 per cent were happy with the local economy, and with stringent COVID-19 measures, employment outlooks here haven’t been as challenging either.

Most respondents were content with their working hours (74 per cent) while two in five couldn’t be any happier with their job - which is nearly twice the international average.

Most respondents were content with their working hours (74 per cent) while two in five couldn’t be any happier with their job - which is nearly twice the international average.

While there may not be a direct correlation, only 51 per cent of those surveyed were allowed to work from home, in contrast to 78 per cent on a global scale.

New Zealand and the Czech Republic are the next best

New Zealand came in a strong second, while the Czech Republic came in third. The eastern European country has consistently been in the top three and gets its strongest rating in the work and leisure category. More than four in five (82 per cent) are generally satisfied with their working hours here and 80 per cent are pleased with their work-life balance.

If you’re considering the digital nomad lifestyle the Czech Republic might be the place for you, as a huge 93 per cent of working expats say they can work remotely.

The country has an above-average number of freelancers too, with 21 per cent of respondents self-employed, compared to an average of 11 per internationally.

Mallorca: Travellers in for hellish summer thanks to staff shortages