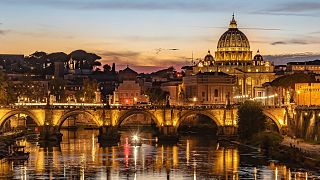 The first thing that struck me about Rome is just how well-preserved the ancient sites are. You might have seen similar buildings in Greece or Turkey, but the sheer volume and quality of historical sights in Rome is what makes it so special.

The most famous sites - the Colosseum, Pantheon, Roman Forum, Trevi Fountain - will be on every visitor’s to-do list. But, as a British expat living in Italy, I’m here to give you some insider tips and local gems to make your trip a little more out of the ordinary.

Read on for everything you need to know about visiting Italy right now, and the insider’s guide to an iconic hotel with the best brunch in the city.

Where to stay in Rome in winter

Rocco Forte hotels have just been named as one of the world's best luxury hotel brands. Luxury Travel Intelligence (LTI) judges hotels on 128 markers, such as passion, ethos of values and quality of staff. Rocco Forte came in at number 11 on the 2022 list, the first time it has ranked.

Hotel de Russie is their property in Rome. Once called "paradise on Earth" by French poet Jean Cocteau, the 5* hotel revolves around a stunning courtyard and garden. Most of the rooms look down on this central area, helping you to feel enveloped in a luxurious and lush world.

The Stravinskij bar, in the courtyard, is a favourite ‘aperitivo’ (pre-dinner drink) spot for well-heeled locals. I recommend joining them, even if you’re not staying at the hotel.

Hotel de Russie is a two-minute walk from Via del Corso, the city’s main shopping street, so you couldn't be better located.

Come Christmas time, the hotel is decorated by a typically famous local. In 2021, they were done by none other than Giorgio Armani so you could soak up Italian style without even heading outside.

The hotel has seen some other decor changes recently. There are seven new Garden Suites, decked out with plush furniture, luxurious fabrics and marble-lined bathtubs. You can also enjoy the redesign in the lobby.

It is designed to have the feel of a ‘refined Roman living room’ and hopes to give guests a warm welcome with its lush tones.

One new feature that was surely inspired by the rise of digital nomadism is the wooden meeting cube. It is intended as a private space for video calls thanks to its webcam, wireless charging and, of course, a ‘sanitisation system that guarantees maximum safety.’

The foods you can’t miss in Rome

Food is one of the main reasons most travellers come to Italy - and one of the reasons I moved here. Since becoming a local I’ve learnt that for Italians, time spent eating with family and friends is a sacred way to connect and, during special times of the year, celebrate.

It’s rare to see a Roman who’s not carrying a 'panettone' at this time of year. The famous sweet bread shaped like a dome comes in beautiful, elaborate boxes. 'Panettone', and its close cousin 'pandoro', originate in Milan but they’re given as Christmas gifts all over Italy. They’re sold in lots of different types of shops all over Rome so it won’t be difficult to find one.

Cakes, biscuits and croissants are staples of the Italian diet. They’re often eaten for breakfast, alongside a coffee, but are available all day. ‘Pasticceria’ (pastry shops) are on every street corner, but Roscioli is one of the most famous. It actually comprises a cafe, delicatessen and restaurant. All are in the neighbourhood between the Pantheon and the river Tiber which snakes through the city.

'Tortellini' (stuffed pasta) and 'abbacchio' (roasted lamb) will be on many tables around Rome at Christmas. Ask for either of them in local restaurants (often called ‘trattoria’) and the chef should be happy to oblige. For tortellini, family-run Dal Bolognese is famous for their version. Booking is recommended, especially at the weekend, and it’s closed on Mondays.

The one Italian tradition you can’t miss

Nativity scenes or ‘presepi’ are everywhere in Italy at this time of year, and they’re more creative than ever. Naples’ most famous scene features popstars, footballers and politicians. While some, like the one in Matera in southern Italy, are ‘presepi viventi’ meaning real people play the characters in the nativity. Yes, really.

You’re likely to stumble across ‘presepi’ while exploring Rome, especially in churches. But if in doubt, ask at your accommodation for some nearby recommendations.

If you want to tick off 100 nativity scenes in one, head to the Vatican for the 100 Presepi exhibition. It’s open every day from 10am-8pm and runs until early January.

The Vatican’s own nativity scene is worth a look while you’re there. In keeping with the times, it includes a QR code for a video about the Christmas story. There’s even a WiFi hotspot so you don’t have to use up your data.

Trentino: Hit the slopes in this magnificent Italian region

12 stays of Christmas: Where to go this holiday season