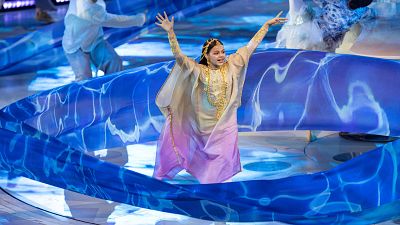 On December 2, 2021, the United Arab Emirates will celebrate its National Day marking 50 years since the Emirates were founded in 1971.

The ex-pat community has been integral to the UAE's success, with 200 nationalities in residence who call the country home.

The UAE Golden Jubilee Committee was formed in December 2019 to map out the Emirates' Golden Jubilee celebrations, developing and executing a comprehensive plan to mark the 50th anniversary.

Among the many festivities in Dubai, fireworks will take place at 8 pm, 8.30 pm and 9 pm local time (5 pm, 5.30 pm and 6 pm CET) on both December 2 and 3 at various locations, including The Pointe, Palm Jumeriah; Atlantis, The Palm; Bluewaters Island; Burj Al Arab; Etisalat Beach Canteen, Jumeirah Beach and La Mer.

Throughout malls and cultural centres, traditional Emirati Al Ayala dances will be performed. The "victory stick dance", listed as an Intangible Cultural Heritage of Humanity by UNESCO, features rows of men dancing to the beat of drums, cymbals and flutes as they wave sticks symbolising swords.

In Dubai's Hatta Dam, from 4 to 12 December, a floating theatrical show will take viewers on a journey through the land's inception and 50-year history, set against the dramatic backdrop of the Hajar mountains.

Hotels and restaurants will also contribute to the emirate-wide 50th-anniversary party, with some offering 50 per cent discounts and others serving Jubilee-themed menus with gold-coated food and drinks, from burgers to café lattes.

Perhaps the most ambitious of them all is Expo's "50-hand dinner". Created by 25 chefs at the world fair's Jubilee Gastronomy restaurant, the degustation menu, to be served on 2 December, is also inspired by gold.

Today, Dubai is a destination of superlatives, home to the world's tallest building, Burj Khalifa, with an airport at the heart of its infrastructure that's consistently ranked among the top 10 busiest hubs on the planet.

"From about the mid-eighties, that's when the UAE really started to accelerate the creation of its national identity," says Clark. "There was a harmonisation of thinking across the various emirates at a high political level and a determination to put itself out there as a country – leading in technology, leading in life science, leading in media – and trying to position itself as an epicentre for that. But to do that, they had to create the infrastructure."

Dubai International Airport opened on 30 September 1960. Since then, passenger numbers have grown at an average annual rate of 13 per cent. Pre-pandemic, in 2019, the airport known as DXB served 86.4 million customers.

Claiming the title of the largest man-made harbour globally, Jebel Ali Port opened on 26 February 1979. On her landmark tour of the Middle East, Britain's Queen Elizabeth II inaugurated the port and cut the ribbon at Dubai World Trade Centre's Sheikh Rashid Tower, the emirate's first-ever skyscraper. Now listed as a building of historical significance, it's pictured on the country's AED100 banknote.

Diwali was celebrated in Dubai with feasts and fireworks

This is the world's deepest pool stretching down over 60 metres

Long-haul bookings are bouncing back, but why not look closer to home?

Madrid: Why the Spanish capital is a foodie's paradise