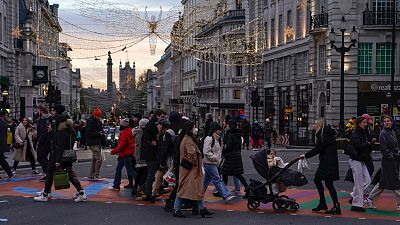 As travel restrictions tighten in the UK and the red list is revived, many people are now worried that further rules could soon be introduced due to the Omicron variant.

Thousands of people have had their Christmas and travel plans thrown into disarray by the arrival of the new variant, which was quickly detected by scientists in South Africa.

Others are concerned about which countries could be added in the coming days. It has brought feelings of déjà vu for those who had their plans derailed by the Delta variant last December.

Though the WHO has identified it as a ‘variant of concern’, the organisation urged countries to take a “risk-based and scientific approach” before imposing sudden travel bans.

In a departure from the UK’s looser handling of previous COVID-19 strains, Transport Secretary Grant Shapps announced the government is taking “early, preventative action” to stop the spread.

More recently, he has ruled out the possibility of travellers entering the UK requiring pre-arrival tests.

“Do you want to kill off the travel sector again without knowing that you need to? Or do you want to take the right level of calibrated response?" he said yesterday, 2 December.

“This government thinks we should take a calibrated response, which doesn’t take us right back to the beginning of this [pandemic]."

But how likely is it that the travel restrictions will change and is more of a united approach with Scotland, Wales and Northern Ireland needed? Here’s what we know so far.

When is the next UK travel review?

Before Omicron became a problem, the UK government had already committed to reviewing its travel rules every three weeks. The last update came on November 18, when nothing changed. It followed the October 28 review where the last seven countries were taken off the UK’s red list.

That means the next regular update is due on Thursday 9 December.

But the detection of the Omicron variant has disrupted this schedule - and shown how quickly the ‘Covid-safe’ map can shift. Mr Shapps’ promise to review the new changes after three weeks means we can expect a more focused update by 20 December.

It’s not yet clear how much we can expect to find out from these Thursday reviews. The Department for Health and Social Care (DHSC), which is leading on the new variant rules, did not respond to request for comment from Euronews Travel on how likely restrictions are to change at the next update.

Crucially, like governments around the world, the UK is waiting to find out more about the Omicron variant - particularly its vaccine-evading properties - to inform the review.

What are the travel rules in Scotland and Wales?

The Scottish and Welsh governments both think Boris Johnson should take a stronger stance. The UK has a devolved approach to setting travel rules, and Scotland’s first minister Nichola Sturgeon has put in place different restrictions for the nation. All arrivals from abroad need to quarantine for eight days and take a PCR test on day 8 as well as day 2.

Currently, travellers landing in England and Wales only need to self-isolate before getting a negative PCR result from their day 2 test.

But Welsh first minister Mark Drakeford joined Ms Sturgeon in her call for a tougher approach across the UK.

“The emergence of Omicron poses a potential threat to the UK. It is clear that the strain is already here and that it appears highly transmissible,” the leaders told prime minister Johnson in a joint letter yesterday.

“We need to work collectively – and effectively – as four nations to take all reasonable steps to control the ingress of the virus to the country and then to limit its spread.”

Their request for a Cobra (emergency planning) committee to discuss unifying border restrictions was rejected by Downing Street, however, which said its current measures are proportionate.

A number 10 spokesperson added that tighter rules would have a “detrimental effect” on the travel industry.