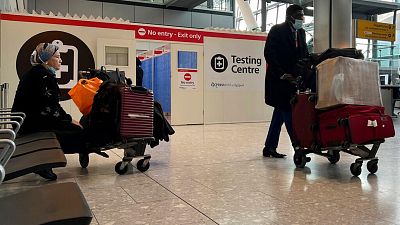 Passengers get a COVID-19 test at a Testing Centre at Heathrow Airport in London.   -   Copyright  Frank Augstein/Copyright 2021 The Associated Press. All rights reserved
By Rosie Frost  •  Updated: 01/12/2021

Day 2 PCR tests are being advertised on the UK government’s list of approved providers for as little as 95p (€1.12).

From 4am on November 30th, new travel rules mean that before travelling to England, passengers must book and pay for a PCR test. You have to book one with a provider listed on the UK government website and take it before the end of your second day in the country. You must self-isolate in your home or the place you are staying until you have received a negative result.

But some passengers are saying that the options available are “false advertising”.

On the government website, the lower the price, the higher the testing company appears on the list. Travellers have reported, however, that these cheap tests are either incredibly difficult or impossible to find once they click through to the provider's website.

Can these cheap tests be used to travel into the UK?

After looking into these (very) low-cost tests, Euronews Travel found that some of the cheapest options were for on-site testing at centres across the UK, or click and collect (when you order ahead, pick up the kit then do self-administer the test).

For many of these kinds of tests, the code required for the passenger locator form (PLF) is only available once the test has been picked up. But all travellers need to input this code onto their PLF, which must be filled in the 48 hours prior to travel.

This means that these very cheap options are really only available to travellers who can collect the kit before departing the country to be used when they return to the UK. Meaning they’re unlikely to be available to anyone based outside of the UK.

Many of the providers’ websites do warn customers that these tests are not suitable for people outside of the UK but not until they actually click through to book.

Some providers also only have a limited number of cheap tests available. So when you click through to their site, you’ll actually have to pay a much higher price.

Since we asked the Competition and Markets Authority (CMA) for clarity on these low-cost tests, several of them have disappeared from the list of approved providers.

The Department of Health and Social Care (DHSC) has also confirmed that international arrivals who are quarantining at home of the place they are staying are permitted to leave in order to post their COVID-19 test or attend a testing site.

They must travel directly to and from the testing site or priority post box and avoid public transport where possible. They must adhere with measures in place including the mandatory wearing of face coverings.

Why are some tests so much cheaper than others?

The information on the government website says that these prices are just a “guide” and “the final price you pay could be different to the displayed price”. It does however say that the prices listed are “for the test provider’s standard service”.

The list is owned and maintained by the DHSC.

"We have strong minimum standards and service expectations of private providers and will not hesitate to take actions against those who do not meet them," the DHSC says.

In September, the CMA published advice to the UK Government on ways to make PCR testing work better for consumers.

It recommended that rules around pricing should cover how they are presented - including prohibiting the advertisement of limited quantity prices. They also said that the prices should include unavoidable costs such as delivery or administrative charges.

The CMA has already launched a formal investigation into one private PCR provider, Dante Labs, after concerns that the firm may be breaking the law.