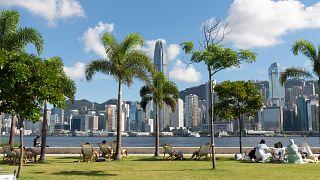 Built on reclaimed land in Hong Kong’s Victoria Harbour, this brand new arts district is set to be one of the largest cultural projects in the world.

The West Kowloon Cultural District is a huge redevelopment that has been over 20 years in the making, and it is already becoming a hangout favourite with locals and tourists alike.

We spoke to a photographer, about what makes this new and spacious development one of his favourite locations to capture the magic of one of the world’s densest cities.

UK photographer, Derry Ainsworth, has been based in Hong Kong for five years showcasing a fresh perspective of the city and he recently has taken to photographing the West Kowloon Cultural District.

What makes West Kowloon different from other districts in Hong Kong?

"I really enjoy spending time around West Kowloon as a nice break from the busy city.

I like to go there to take pictures of the skyline during sunset and also grab a bite to eat at the restaurants on the waterfront.

With the opening of the new M+ Gallery, West Kowloon has become the arts and culture destination for Hong Kong."

How does the city of Hong Kong and its different neighbourhoods inspire your work?

"It has a really interesting mix of modern skyscrapers and old streets full of history and culture and character.

Each district in Hong Kong tells its own story and I enjoy capturing their varied characteristics on camera.

West Kowloon is a place of discovery, creativity and leisure. It’s a unique spot in Hong Kong that allows for some of the nicest walks and views of Victoria harbour."

The development is still growing fast with the Hong Kong Palace Museum set to open next summer, as well as multiple performance venues in the next few years.

Derry's collection of images from Hong Kong and the West Kowloon District have been curated in partnership with CP Collectives.

Why are skiing holidays in France becoming a thing of the past?

These are the best hotel breakfasts in the world

UPDATED: COVID-19 Travel restrictions for every country in Europe

Which European countries require a booster jab from travellers?