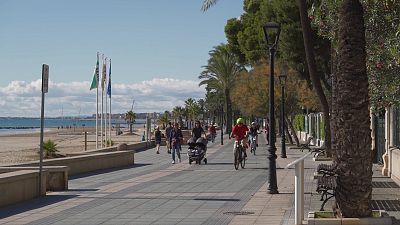 Benicassim on the Costa del Azahar in the north of the Valencian Community is known for its beautiful beaches and its vibrant music festivals. This dynamic Mediterranean town also hides a rich cultural history and fascinating green walks overlooking the sea.

With its privileged views over the bay, the emblematic watchtower of San Vicente is a great place to begin a trip to the area. It is steeped in history: When pirates roamed the coasts, it served as a lookout to help combat raids. Today it is an interpretation centre.

During the Belle Epoque years, the local bourgeoisie built elegant and eclectic summer villas along the promenade in Benicassim. Some are reminiscent of the ones on the French-Basque coast. That’s why this place is known as the Biarritz of Spain's Mediterranean shores. The owners of such houses were renowned for combining the pleasures of beach life with their vibrant social lives.

José Manuel Rabasa, a tour guide in the area, describes what characterises these houses the most. To him, it's the gardens. "They are very interesting because they used to be like showcases. The Bourgeoisie used them to show what they were capable of, they did their parties there (...) These gardens also showed their cultural wealth and their open-mindedness."

This rich cultural life is still part of the town's DNA. Some villas have even opened their doors to host cultural events reminiscent of an era that has left an indelible mark on this Mediterranean paradise.

The Via Verde del Mar begins at the end of the promenade. It's a green route built on the old railway tracks that used to connect Valencia with Barcelona. It's the only such route running along the coast in Spain.

The green of the Oropesa mountains there expands out into the Mediterranean offering spectacular views and a unique natural setting.

Belen is an environmentalist and landscape interpreter. She knows the six kilometres of this greenway like the back of her hand. She tells us that it's a unique and privileged place for both the multitude of animals and plant species that find refuge there. It's also a biodiversity hotspot. According to her, it is said that "in one square metre of Mediterranean scrubland, you can find much more biodiversity than in one square kilometre of the Black Forest in Germany."

Along the Via Verde del Mar trail, there are flora micro-reserves to safeguard biodiversity, watchtowers and crystal-clear coves carved into the rocks. All of these can be enjoyed whilst taking in the sun and the Mediterranean breeze. It's the perfect spot for green tourism and it's increasingly being chosen by visitors.

Inland Benicassim also has places to explore, like its natural park called Desierto de las Palmas. It's worth dusting off your hiking boots to walk along its trails through the ruins of an ancient monastery, castles and chapels. The scenery over the sea is also a must-see.

There's no way you can leave this area without tasting the excellent local cuisine and the top dish here is rice. There are hundreds of ways to cook it. The secret is a good ‘broth’ made out of quality local produce. 'Arroz del Senyoret', Gentleman’s rice, is particularly delicious.

It was given this name because the seafood in it is already peeled, hence it’s all ready for a gentleman to eat it. You don't have to peel the shrimp at the table and the mussels are already opened.

Like the local gentlemen once living in the villas, you don't eat 'Arroz del Senyoret using your hands and the custom is to eat it straight from the pan using a spoon.

Travelling through Benicassim is fascinating thanks to its green hiking trails and villas from the Roaring Twenties. It's the perfect destination for those who love nature, culture, history and Mediterranean cuisine.

How a clash of cultures transformed Tokyo's Harajuku district