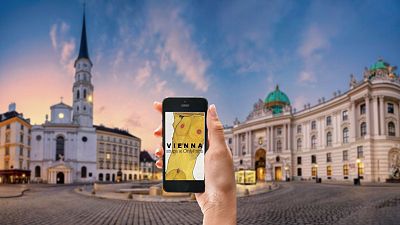 The city has 'found freedom' in showing its nude works on OnlyFans.   -   Copyright  Rudy Balasko/Getty/Vienna Tourist Board
By Lottie Limb  •  Updated: 18/10/2021

Vienna Tourist Board is on OnlyFans. Yes you read that right, the Austrian capital has taken to the subscriber-only site better known for pornography, to showcase its nude art.

In a bid to attract more real life visitors - and make a bold statement about the place of nude art in Western culture - the tourist board has uploaded photos of naked muses painted by the likes of Modigliani.

OnlyFans was at the centre of a social media storm this summer when the company announced plans to ban “adult” content from its platform. The move, which would have driven out the sex-workers who builts its audience, was reversed just days later after huge outcry from creators and users.

The city is inserting itself into the debate with its ‘Vienna Strips on OnlyFans’ initiative. The tourist board claims its art galleries have fallen foul of Facebook and Instagram’s strict censorship rules for human nudity on several occasions.

"In social media, algorithms determine how much nudity may be shown and often censor world-famous works of art,” says Vienna Tourist Board director Norbert Kettner.

“We question how much nudity we can tolerate and who can determine what we find offensive. In the cultural metropolis of Vienna, the question can be answered: nude art is a socio-political and artistic part of cultural history."

Subscribers to the OnlyFans page will receive either an official sightseeing card or an admission ticket to one of the museums where the explicit artworks can be seen in the flesh.

Subscribers to the OnlyFans page will receive either an official sightseeing card or an admission ticket to one of the museums where the explicit artworks can be seen in the flesh.

Which Viennese museums are showing their masterpieces on OnlyFans?

Vienna is celebrated for its art institutions, and now their historic 18+ works are reaching a wider audience.

The Albertina Museum currently has an exhibition of works by Amedeo Modigliani, the 20th-century Italian painter famed for his unique, elongated portraits of women. They were also often nude, making them too explicit for social media.

Having previously fallen “victim” to censorship, according to the tourist board, the Albertina now has a special space for presenting its artworks online.

The Leopold Museum, which houses the world’s largest art collection by the expressionist Egon Schiele, has also signed up.

The Leopold Museum, which houses the world’s largest art collection by the expressionist Egon Schiele, has also signed up. The Austrian’s art “famously irritates and provokes the attention of censors a hundred years after his death,” the Vienna Tourist Board said in a release.

An 11.1 centimetre tall figurine made 25,000 years ago, the Venus of Willendorf seems an unlikely object to arouse Facebook’s prudish side. Yet photos of the world-famous artwork, housed by The Natural History Museum Vienna, were recently considered pornographic by the social media giant and so deleted.

The Kunsthistorisches Museum, home to one of the world’s largest picture galleries, is also joining the party. It boasts numerous “spicy masterpieces” by Rubens and Titian, which can now be found uncensored on Vienna’s OnlyFans page.

Taking on the social media titans

Laying it all bare hasn’t been easy, the tourist board revealed. Twitter initially banned a link to the board’s official website because it contained a cross-link to OnlyFans.

Facebook and Instagram allowed the application with the Venus of Willendorf and a Modigliani painting, after the art context was explained to the channels’ service teams.

However the Schiele subject and the Rubens subject were rejected on the grounds of "excessive nudity" and "adult entertainment".

If you’d like to take a look for yourself, the Vienna OnlyFans channel is now promoted on Twitter and Instagram where visitors can find teasers of what to expect on the page.