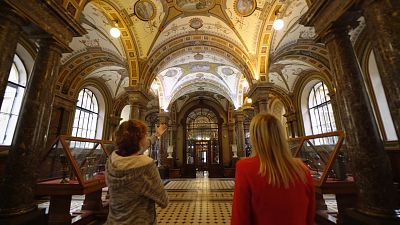 Autumn in Saint Petersburg is a special time of year and it's ideal for exploring the city’s cultural sites.

A school fit for purpose

The majestic Stieglitz State Academy of Art and Design, which was founded in 1876, is a great place to start your cultural trip. Located in the historical part of Saint Petersburg, it’s home to masterpieces that were initially housed there for students to learn from the work of world masters. Some even describe the Academy and its museum as an open book about the history of arts.

The school was founded by the person it gets its name from Alexander von Stieglitz, who was a prominent banker, industrialist and philanthropist at the time.

The man who built the museum building between 1885-1896 was the famous Saint Petersburg architect, Maximilian Mesmacher. He was also the director of the school at the time. Almost all the historical eras and styles are said to be reflected in the decoration of its 32 halls.

Sonya Dmitrieva is a furniture design student at the Academy. She says that Saint Petersburg is a city of creativity. To her, the beginning of autumn is "a very special, bright time, ideal for going to museums and exhibitions". It seems to her that at the Stieglitz State Academy of Art and Design, you can especially feel "the city's special creative atmosphere, which can inspire anyone".

At the city's dockyard, there is another work of art waiting to be discovered and it was designed by Peter the Great himself. There is a full-scale replica of the Poltava, the Russian Navy’s first ship of the line. Everything onboard functions exactly as it did in the past. Every detail tells a story about the times of Peter the Great, the founder of Saint Petersburg.

Being on the Poltava replica gives you an amazing feeling, you feel like you're travelling through time to the era of Peter the Great. It makes history seem palpable.

From the admiral’s balcony, you can also see how Saint Petersburg's past meets with its present, as you get a direct view of the futuristic Lakhta tower, the tallest building in Europe, sparkling in the distance.

_St Petersburg is a member of the World Travel and Tourism Council’s ‘Safe Travels’ scheme. You can find out which of the city’s attractions are recognised as having adopted the Safe Travels health and hygiene protocols here._

Here's why St Petersburg is a top destination for football fans

A trip back in time: Bulgaria's Rila Monastery