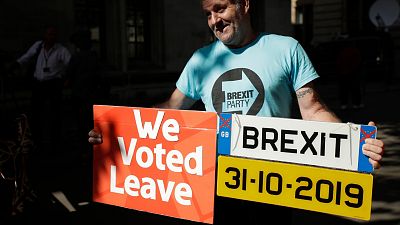 A Brexit supporter holds up a placard and a mock car number plate outside the Supreme Court in London.   -   Copyright  AP Photo
By Jonny Walfisz  •  Updated: 30/09/2021

Brits driving to the EU will now need a new sticker to point out that they’re in a UK car.

The new rule change by the UK government came into force on 28 September. Drivers of UK cars must now have a clear sticker that says ‘UK’ on it.

The UK sticker replaces the old ‘GB’ sticker. The government advises “if you have a GB sticker, cover or remove it before driving outside the UK.”

You don’t need to worry about a UK sticker if you’re driving to Ireland, but the rule is applicable for the rest of the EU.

According to government advice, cars with any of the following will need a new sticker:

Why the new UK sticker?

“Changing the national identifier from GB to UK symbolises our unity as a nation and is part of a wider move towards using the UK signifier across government,” a spokesperson for the Department of Transport (DfT) told Euronews Travel.

“GB number plates will still be valid within the EU as long as drivers display a UK sticker on the rear of their vehicle.”

“Stakeholders were informed of the intention to change the signifier ahead of notifying the UN.”

The term ‘Great Britain’ only refers to the island that contains the countries England, Scotland and Wales. ‘United Kingdom’ also includes Northern Ireland.

These terms shouldn’t be confused with “British Isles” which refers to all the islands and includes the Republic of Ireland.

The use of UK instead of GB is more inclusive to Northern Irish people.

You can buy the new stickers online or from post offices for €1.75.

You can buy the new stickers online or from post offices for €1.75.

Other UK-EU driving rules you should know about

The new sticker isn’t the only thing you should be aware of before you set off on your European road trips.

Some drivers will need to get an International Driving Permit (IDP) before setting off.

Although most UK drivers can use their normal licenses to travel around the EU, if a driver’s license was issued in Gibraltar, Guernsey, Jersey or the Isle of Man you’ll need an IDP.

If you only have a paper license and not a photocard, you’ll need an IDP too.

If you do need one, there are three different kinds and the one you need will vary depending on the country you plan to visit. You can find a list of the different IDPs here.

No need for green cards

To make things easier for a change, UK drivers won’t need a green card anymore to travel to the EU.

To make things easier for a change, UK drivers won’t need a green card anymore to travel to the EU.

The green card is an insurance card to inform local officials that your car is fully insured.

But drivers won’t need to have a green card after a change to the rules this summer. Now, the standard insurance you have in the UK should cover your European trip without the need for extra paperwork.

Another document to keep in mind is your passport.

You will now be required to have a visa if you want to stay for longer than 90 days in a 180 day period in the EU.

And your passport must have at least three months of validity left before you travel, according to the EU.

But be careful, as the UK has been operating under its own different guidelines and might demand you need six months’ validity to travel - even if that’s not the EU requirement.