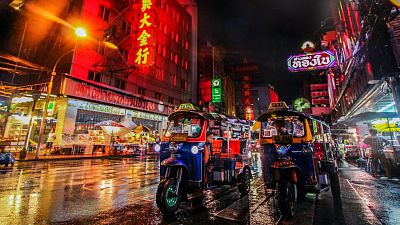 International travellers will soon be able to visit Bangkok without having to quarantine.   -   Copyright  Unsplash
By Euronews  •  Updated: 16/09/2021

Five new destinations in Thailand are getting ready to welcome fully vaccinated travellers from October 1st - without them having to quarantine.

Bangkok, the country’s capital city and a favourite with tourists, is one of the locations on the list. It will be joined by the provinces of Chaing Mai, Chon Buri, Phetchaburi and Prachuap Khiri Khan.

It is being called the ‘sandbox’ model and if you plan on booking a trip to any of these places, you will have to stay within a certain area for seven days after arrival with regular COVID-19 tests during that time.

From mid-October, you will also be able to visit another 21 destinations up and down the country with more Thai destinations set to open to international tourists in early 2022.

So what is there to do in these five soon to open Thai destinations?

This province is popular with backpackers and is a showcase of northern Thailand’s unique Indigenous cultural identity.

Its capital city, also called Chiang Mai, was founded over 700 years ago and has picturesque, leafy streets that offer a calmer alternative to the urban sprawl of the city. If travel restrictions have you staying in the same area for seven days, then there is plenty to explore in its Old Town.

Centuries ago, Chiang Mai was surrounded by walls that now enclose this 1.5-kilometre square section of the city. Inside, you’ll find a number of untouched parts of the original architecture including the Thai Pae Gate and a selection of ancient temples.

A temple tour will take you around them all including Wat Chiang Man, the oldest, Wat Phrathat Doi Suthep, high on a 1,073-metre high peak, and the beautiful 14th-century flower gardens of Wat Suan Dok.

If you are looking to bring home some of northern Thailand’s handicrafts and art, then a visit to the Sunday Walking Street market is a must.

Find out more about booking a holiday in Chiang Mai here.

With a capital city just 80km from Bangkok, this province is a haven for beach lovers.

The island of Koh Larn is a small island just a few kilometres off the coast of Pattaya and has a selection of beautiful white-sand beaches. On the opposite side of the island, keen divers can swim through the crystal clear waters to see the coral reefs. For those who would prefer to experience the waters from above, there are also glass-bottom boat tours where you can catch a glimpse of this incredible natural environment.

The 130 metre-high Buddha Mountain is one of the region’s most noticeable landmarks. It is laser carved into the mountain then inlaid with gold leaf to create the image. The landmark was built in 1996 to commemorate the 50th anniversary of King Bhumibol Adulyadej’s reign and is surrounded by beautifully landscaped lotus pools and gardens.

From October to January, during the country’s rainy season, travellers can take a boat tour into the waters off the coast of Phetchaburi to see the Byrde’s whale. These magnificent creatures live in this region for much of the year before venturing out into the Gulf of Thailand to feed on anchovies during the rainy season.

Tham Khao Luang is another tourist favourite. This cave is filled with impressive stalactites and stalagmites. But the undeniable highlight is a decorated Buddha which, when the sunlight shines through the ceiling of the cave, is illuminated by gentle beams of light.

Kwangchow’s floating market is the first and only to be located on a waterfall. Visitors can hire a boat to paddle through and sample traditional local food and drink. Tourists pay a 20 baht (51 cents) admission fee from 9:30 to 17:30 every weekend.

More information on Phetchaburi and how to book a trip can be found here.

This province’s capital, also called Prachuap Khiri Khan is located in a bay between two limestone hills. It is quieter than other cities on this list, but the long beachside boardwalk comes alive once the sun goes down.

It also has a Langur preservation area, home to the Dusky Leaf monkey. These animals are only found in parts of Thailand, Malaysia and Myanmar. Urbanisation, hunting and agriculture mean that their numbers are dropping and this preservation area in the Wing 5 military base was created to help ensure their continued survival. The area is open to the public but visitors will have to sign in.

Crossing the runway of the military base, travellers will find Ao Manao beach. It is a quiet spot during the week but becomes busier on the weekends and holidays as a popular place for local people to visit. There is also a golf course and a park with some of the area’s military history if you are looking for something a bit different to do.

Find out all you need to know about booking a trip to Prachuap Khiri Khan here.

Bangkok is the capital city of Thailand and, as you might expect, is a busy hub with hundreds of things for tourists to see and do.

The Grand Palace in the heart of Bangkok is probably the most famous attraction here. It was home to the king for 150 years and was where the government of Thailand was based. There are 214,000 square metres of grand temples and incredible architecture to cover in a visit so more than enough to keep you busy.

One of the city’s most visually striking landmarks is perhaps Wat Arun or the Temple of the Dawn. Its 79-metre tall spires rise over the Chao Phraya River and are intricately decorated with tiny pieces of coloured glass and porcelain.

Traffic is an eternal problem in this city so if you are looking for an alternative way to get around then the BTS Skytrain might be the answer. Although this doesn’t travel through much of the city, most of the popular tourist destinations are covered meaning you can zip over the packed roads and stationary cars while exploring Bangkok.

There’s much more to do in Bangkok than what we have listed so take a look at the information here before booking your trip.