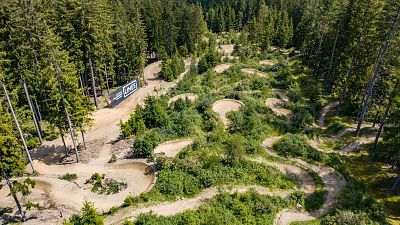 With the winter ski season getting shorter each year because of climate change, the tiny Alpine village of Sankt Corona am Wechsel in Austria saw the number of visitors coming to hit their slopes dwindle.

"The area was 100 per cent winter oriented and then we realised that due to climate change, [...] summer was becoming more and more important. And so in 2015 we started to focus on developing the summer season and this is the result," explains former snowboard instructor, Karl Morgenbesser.

A rollercoaster-like summer toboggan run and climbing space soon opened after the decision to diversify. But the 400-resident village's fortunes truly turned when it devised a network of mountain biking trails.

The resort, which is about an hour’s drive from Vienna, now offers miles of landscaped jumps and curved forest trails and areas suitable for bikers as young as three. While most mountain biking destinations boast steep slopes, Sankt Corona's undulating trails suit professionals as well as children relying on training wheels, and now draw about 130,000 visitors per season.

Perhaps the most innovative part of the new adventure park is the bike lift. In 2020, a new T-bar lift - which pulls bikers up the slope - replaced a shuttle bus service taking riders to the top which could no longer keep up with demand.

"I think we were the first in the world to build a T-bar for the summer. [...] We had to develop it ourselves as there was no other system like it already available,” says Morgenbesser, who now runs the park.

Why was the ski season no longer profitable?

When you think of the Alps, most people associate them with skiing and other snow sports. Situated at an altitude of nearly 900 metres, Sankt Corona am Wechsel has long been known as a family friendly ski resort. However, in the last 50 years nearly a month of snow cover has been lost in the Alps at low and medium altitudes.

According to the UN's Intergovernmental Panel on Climate Change (IPCC) report it’s only going to get worse, with snow cover in areas below 1,500 metres (5,000 feet) expected to continue to decrease throughout the 21st century.

Austria is home to more of the Alps than any other European country and skiing accounts for around three percent of its GDP.

With the coronavirus pandemic fuelling an increased enthusiasm for outdoor activities, it is hoped that mountain biking and other summer sports can make up for winter losses in the increasingly warm and lower lying areas of the Alps found in Austria.

Watch the video above to see Sankt Corona’s transformed resort in action.