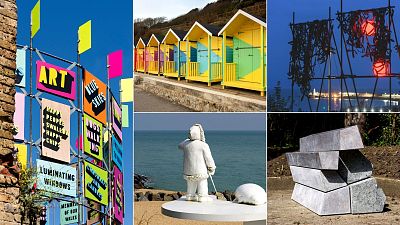 Outdoor art is the latest trend - supercharged by COVID and our newfound enthusiasm for the outdoors (and fear of the indoors) coupled with us caring more about our environment - artists are increasingly entering into dialogues with the world around us.

From Folkestone on the south coast, where its Triennial has just begun, up to Scotland, this is the summer of outdoor art around the UK.

As the ferry to the isle of Bute steams towards Rothesay Harbour, you could be forgiven for forgetting that human-made art has lured you to this pristine island off Scotland's West Coast. In Jonathan Meades and Francis Hanly's hyperbolic film about the Western Isles, Meades paints Lewis and Harris as giant works of art displaying nature's often brutal Herzog-ian majesty.

A tribute to the natural landscape on a Scottish isle

Bute is also a giant work of art, its lochs shimmer, its beaches are magnificent and its glacial rocks and rolls of grass demand to be stared at.

It's like a nicely ageing celebrity, a David Attenborough perhaps – he lived here once.

But in an unused tennis court outside the handsome hall of Mountstuart House lies an otherworldly outdoor art work. An Inn For Phantoms Of The Outside And In is by Martin Boyce and pits giant circles against giant squares, all around a dilapidated court like something from Ballard.

Boyce loves disused and abandoned spaces and says his work explores “one place shipwrecked within another”.

Bute is a wild place - and its story of becoming the home to 100 Syrian immigrants inspired the new movie Limbo. With There is a Volcano Behind My House, also currently on show at Mount Stuart, artist Ilana Halperin uses the show-off topography and geology of Bute to inspire pieces of sculpture and textiles.

Next year artist Abbas Akhavan will come to Bute and make art based on the natural landscape which will be scattered around the isle.

No visit to Bute would be complete without a wild swim in the chilly Firth of Clyde and a look at the flashy 1938 Rothesay Pavilion where Mogwai brought the house down in 2001. It's in the process of being restored and will hopefully reopen soon.

Jazzing up a seaside town

Down in Folkestone the entire Kent seaside town has become an outdoor art gallery. Art from previous Triennials is often bought and kept so you can see great stuff at any time. But during this summer the delayed Triennial brings even more new sights to Folkestone.

Morag Myerscough's drum-shaped pavilion at the old Gasworks evokes the gasholders that used to stand here and blares out fun phrases in bright neons like I WANT TO BE PART OF IT and EVERYTHING CARRIES ME TO YOU.

Rana Begum's pastel painted beach huts on the promenade jazz up this peculiar piece of vernacular architecture that's particular to the British seaside - each hut is a slightly different shade. Along the seafront you can find giant bells, statues, signs saying weird things, coloured arches and numerous other intriguing works of art from this year's Triennial and previous ones.

The refurbished Harbour Station and the former rail bridge over the water have been turned into Folkestone's answer to the Highline in New York – the Triennial and Creative Folkestone are keen to ram home how they're about more than tokenism or tourism. They want to improve the town.

They show tourists and journalists around the muf architecture open spaces in the town (muf is a collaborative practice of art and architecture committed to public realm projects) and the wooden live/work studios that have appeared in formerly unloved bits of wasteground.

Perhaps the symbol of the Triennial and maybe of the town now is Richard Woods' orange bungalow perched at the end of the harbour wall - it looks homely and sort of horrifying at the same time, like something from Banksy's Dismaland show a few years back.

More outdoor art to have on your radar

Hospitalfield is an artists' house which opened again this summer, with Mick Peter's outdoor sculptures, a new fernery and more – find it in Arbroath.

All around Calton Hill in the centre of Edinburgh you can find Tessa Lynch's work. Also check out Edinburgh's new Fruitmarket Gallery and Collective which will be opening their own 'art guest house' on Calton Hill later this year.

Yorkshire's amazing sculpture park in the rolling hills between Wakefield and Sheffield is blessed with Henry Moores, Bridget Rileys, a Victor Pasmore, some Damien Hirsts and a new gallery space.

The serene surroundings of Houghton Hall in Norfolk have been the setting for James Turrell's works, Anya Gallaccio's and Rachel Whiteread's too.

Henry Moore’s old house Hoglands, his studio and the gardens make an intriguing combined visit, and yes there are lots of his sculptures in the grounds on the Hertfordshire / Essex border.

Where to stay and what to eat

In Folkestone The View is right in the thick of the action overlooking the sea on top of the Cliffs. Smart rooms and good food too, especially the seafood pasta.

For Mount Stuart in Bute stay at the Moxy in Glasgow's buzzing Merchant City. This hip hotel makes the perfect base for a roadtrip to Bute, which is only an hour and a half away by car and then by scenic ferry. Moxy is surrounded by bars and restaurants and has a cool lobby to hang out in.

Dine in Glasgow with a flourish at Sapporo where the chefs will entertain you by throwing slices of spuds in your mouth and the salmon is delicious. Try Ziques for healthy meals in the cool West End of the city. Bakery and hot meals too.

For Yorkshire Sculpture Park the Leopold is Sheffield's premier four star boutique hotel set in a handsome old former boys' school which oozes history. This historic hotel has great attention to detail. They have partnered with local restaurants Grazie, Piccolino's and Pho Cafe.

In Edinburgh the Collective's Observatory House is soon to open as is the city's new W Hotel. Citizen M in Glasgow is an art-led hotel with lots of cool, quirky design features and is on point if you want somewhere young and vibey.

Near to the Henry Moore Gardens is the apt Birch which features art and craft classes, a design-led hotel with simple, chic bedrooms, a new outdoor pool and the well-regarded restaurant Zebra Riding Club, whose cuisine takes its lead from fresh produce sourced near to Birch.

You can travel to Glasgow and Edinburgh from London Luton and Gatwick with easyJet.

I flew for the first time since the pandemic: Here’s what it was like