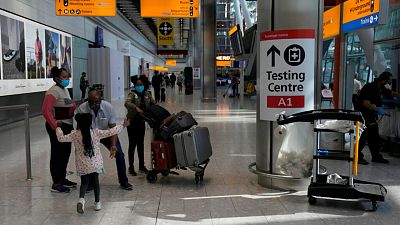 As travel restrictions lift, many UK residents are looking to travel abroad - but the cost and reliability of COVID testing in the country have been called into question.

Following criticism, the cost of NHS Test and Trace tests for international arrivals has been cut by £20 (€23) and a review of private providers has been launched to crack down on "excessive pricing or misleading claims".

The UK is the second most expensive country for PCR tests, with travellers paying an average of £92 (€108) according to research from Admiral travel insurance. For the tests required before and after travelling to red and amber list countries, this means an average additional cost for your holiday of £184 (€216) per person - £552 (€649) for a family of four.

More than 100 of the providers on the government’s list of those which meet minimum standards are charging £200 (€235) or more for testing.

“Our research shows prices for PCR tests vary significantly between countries and UK residents seem to be forking out a lot more in comparison to people living overseas,” says Cosmin Sabru, head of travel insurance at Admiral.

Madeleine, a student travelling home from the Netherlands paid nearly £400 (€470) for tests.

“It was outrageous because I wasn’t on holiday, I was returning back to the UK from studying,” she says. “I felt like I was being punished for something out of my control.”

Other UK travellers told Euronews that some government-approved testers were using "bait and switch" tactics to charge more. In one case, they found that available tests were five times the price of cheaper tests they were unable to book.

Conservative MP Henry Smith, who chairs the Future of Aviation All-Party Parliamentary Group has called for a £40 cap on the cost of testing. He says that UK holidaymakers are having to “pay through the nose for a battery of tests that on average still cost around £100 per traveller”.

“The real risk is that air travel becomes the preserve only of the wealthy, for whom adding £400 to the cost of a family week in Spain is no big deal,” Smith wrote in The Telegraph.

What is the UK government doing about the cost of PCR tests?

Last week, UK health secretary Sajid Javid wrote to the Competition and Markets Authority (CMA) about issues with the price and quality of service from test providers.

“I know that for too many people the cost of PCR testing can act as a barrier, especially for families who want to travel together,” he wrote.

“We have all experienced enormous disruption to our lives over this pandemic but it is not right if some families experience yet further disruption unnecessarily because of potentially unfair practices in the market for private travel tests.”

CMA chief executive, Andrea Coscelli said the watchdog is “aware of concerns” about price, quality of service and what happens when things go wrong with COVID-19 tests for international travellers.

Following the request for a review on pricing, the cost of an NHS Test and Trace travel test was reduced from £88 to £68. The government is also reviewing its list of private test providers to ensure pricing is accurate and transparent.

Too many providers are acting like cowboys and that needs to stop. The public should be allowed to enjoy their summer holidays without having to face excessive costs or anxiety.

"I’ve also ordered my department to urgently review the list of private providers on gov.uk to ensure pricing is clearer and transparent. Any provider found to be misleading the public will be kicked off," says Javid.

"Too many providers are acting like cowboys and that needs to stop. The public should be allowed to enjoy their summer holidays without having to face excessive costs or anxiety."

How can you avoid paying more for PCR testing in the UK?

Before you travel, it is best to check the testing requirements for your destination and make sure you have the correct paperwork before jetting off. Sabru advises that you should book PCR tests as soon as possible to get the best price.

“To make savings, compare the prices between approved UK providers to check you’re paying the standard rate and not being overcharged for the service,” he says.

“Selecting a bundle package that includes all the travel tests required to go abroad will also help to reduce the additional costs, and shopping around is one of the best ways to find a good deal whether that’s with your holiday provider or airline”

He adds that to avoid being caught out and scammed, travellers should always check that a provider is properly regulated before booking any tests with them.