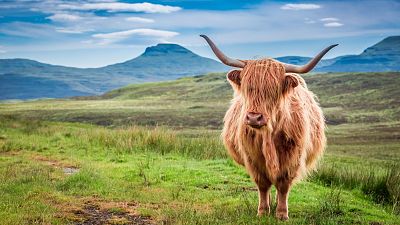 The Isle of Skye is not only one of Scotland’s more aurally pleasing islands (contenders for the title include Eigg, literally pronounced ‘egg’, and another which is simply called Muck), but it is the undisputed home of some of the UK’s most dramatic and beautiful scenery.

In the past couple of decades, the island’s tourist numbers have seen a definite uptick. Thanks to interconnectivity and Instagram, visitors come from all over the world to see the iconic sights of Skye.

But don’t be fooled by the hyper enhanced images you see online. The native gin distilled on the island is called Misty Isle for good reason.

Here on Skye, the sun can be unpredictable any time of year - but the sunsets are well worth the wait.

The landscape isn’t exactly lush rolling hills either; it’s a staggering backdrop of moody and ancient crags and cliffs. The unruly Atlantic Ocean surrounding it is usually tamed by lochs, but can prickle with a storm, crashing against the black rocks that characterise much of the coastline.

As someone who has been visiting Skye since childhood, I honestly feel comfortable enough with the island to say it’s not for everyone.

It’s a three-hour drive from Fort William, the nearest mainland town. What’s more, the vast majority of the tourist hotspots have signal issues and - as I discovered during my most recent trip - sourcing petrol is like a game of Russian Roulette (petrol stations can run out of fuel?).

Despite these quirks, Skye is the ultimate destination to switch off. ‘No signal’ cues the Hallelujah Chorus for most Millenials I know.

The nights are pitch black and starry, the surroundings are quiet aside from the gentle swell of waves and occasional Highland cow, the air is clean and the water is fresh. You spend a lot of time outdoors, so you can basically call it at 5pm and go to the pub.

Grab your waterproof and walking boots: here’s everything you need to see on Skye.

Skye’s capital is home to a colourful harbour, some of the cosiest pubs and restaurants on the island and independent shops. Make sure you check out Skye Batiks for some pretty unique clothing and Portree Hotel for a pint of the local brew.

This naturally formed crevice at the base of Skye’s Black Cuillin mountain is a terrace of crystal clear rock pools and waterfalls. According to legend, a Clan MacLeod chief married a fairy princess, giving rise to many fairy place names on the Isle of Skye. There’s a five kilometre walk along the Fairy Pools for an incomparable view of the formidable Cuillins.

Skye’s most infamous mountain range dominates the south west of the island. Hikers - unlace your boots and put your walking sticks down, because this challenging climb is a scramble fit for only the most adept of extreme sportists. The 32-kilometre circuit, which traverses 22 peaks and 992 metres in height, is infamous for failed attempts. But even from ground level, the mountains can be appreciated in all their glory.

The Old Man of Storr

Storr meanwhile is a much more accessible hike. The recognisable rock is said to be the burial site of a giant, the Wulver of Shetland, who lived in Trotternish Ridge. When he was put to rest, his thumb was left jutting out the ground.

Another of Skye’s bigger towns, Dunvegan is home to a vibrant high street lined with pubs, coffee shops and the Giant MacAskill Museum. It’s perhaps best known for Dunvegan Castle, a fun family day out, and its proximity to Coral Beach.

Skye’s coastline can be summarised thus: mostly rocky beaches, sometimes sandy beaches, then one random peninsula where the stand-out beach is composed entirely of coral.

For a long stretch of sand and shallow, still waters, get yourself to Glenbrittle. The campsite has a really cool little shop for coffees and ice creams, and there’s a gorgeous walk along the cliffs from which you can see neighbouring islands Soay, Rum and on a really clear day, the aforementioned Eigg.

Uig and the Isle of Skye Brewery

Uig is the home to the island’s major port, and dominates road signs from the last mainland stop, Kyle of Lochalsh. The small town is about half an hour from Portree and has some great accommodation options - plus, it’s home to the Isle of Skye Brewery. Spend an evening sampling the local beers and watching the ferry come in.

14 of the most eco-friendly travel companies in Europe

The rise of ‘slow travel’: What is it and who is it for?

Travel the UK like a local: Must-sees and best-avoided