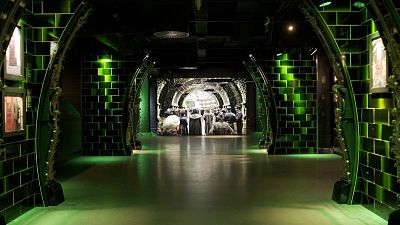 Hundreds of behind-the-scenes images from the Harry Potter films form the heart of a new exhibition in London marking 20 years since the Boy Who Lived cast his first spell on screen.

Key moments from throughout the series have been frozen in time at the new exhibition in London’s Covent Garden. From Harry's first journey from Platform 9 3/4 to Hogwarts castle in the first film and the climactic Battle of Hogwarts.

"At the end of every movie, we were given a load of photos from when we were filming and were always told, keep them kind of private," notes actor James Phelps, who played Fred Weasley in all eight Harry Potter films.

"But now it's great that some of those are now open to the whole public to see. And you can actually see how many people worked on the films and behind the scenes of some really memorable moments in the movies."

Visitors can see costumes and behind the scenes photographs of the actors, sets and crew. Fans can also get involved in the wizarding world by sampling some butterbeer at the bar, posing for a Ministry of Magic identity card or having a go at "flying" on a broomstick.

Watch the video above to learn more about this magical exhibition.

Harry Potter cast back on screens for franchise's 20th anniversary